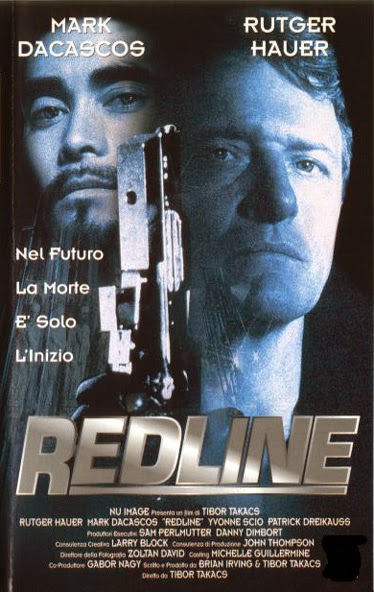 At some point in the future, world governments have everyone under strict control (hmmm...) so Wade (Hauer) and Merrick (Dacascos) work as smugglers. While in Russia on what seems like a routine smuggling operation, Merrick shoots Wade and leaves him for dead. What Merrick forgot is that this is the future, so, using some form of biomechanical technology, Wade is resurrected. All Wade wants is the money he lost to Merrick during their smuggling, and if there’s time, maybe some revenge. He then teams up with a woman named Katya (Scio), and off they go on their mission. Coming up against a large criminal syndicate, they get into a lot of shootouts and fights. Will Wade finally draw a REDLINE in the sand?

Not to be confused with any of the other myriad movies with the name Redline (most of which are about cars), this one, of course, is the Nu-Image production starring Rutger Hauer and Mark Dacascos. Tom Berenger, “Turbo” and the rest of the gang from Cutaway (2000) are nowhere to be seen. Sure, Redline shopped for its influences at the same store as everybody else: Robocop (1987), Total Recall (1990), Demolition Man (1993), and, of course, Blade Runner (1982) - but thanks to healthy doses of violence and nudity, it’s a largely entertaining watch. At worst, it’s a painless one, anyway. 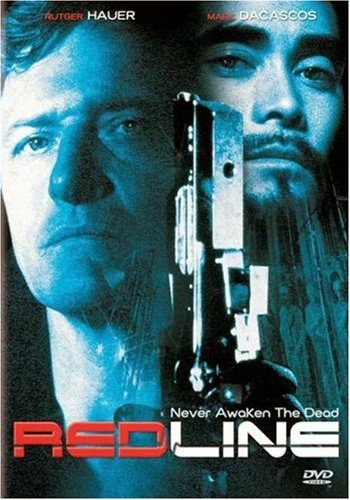 Rutger Hauer is an underrated actor and a fan favorite, and he looks a lot like Robert Redford in this particular outing. Actually, better than Redford looks now. Of course, Wade is ex-CIA and since he’s the hero, he’s subjected to his Prerequisite Torture, but on the bright side, when he comes up against what can only be described as Corey Haim-style Rollerboys, it appears he calls the lead Rollerboy “Butthead” and they all go blading away in fear for their lives.

It helps a lot that his sidekick is Yvonne Scio, and that she shoots and beats up the baddies with the best of them. Fellow fan favorite Dacascos, here as the antagonist, complete with goatee and accent, provides good balance to the film overall, though he only displays his Martial Arts abilities in one scene. He previously teamed up with director Takacs with the prior year’s Sabotage (1996), and evidently Takacs liked what he saw, so he used him again here. It worked out well.

Yes, there is a lot of cliched dialogue and many scenes are very darkly lit, but because it was a movie about the future that was made in the 90’s, naturally we get some VR. It wouldn’t be complete without the VR, of course.

Plus, Redline was ahead of its time with scenes of drones attacking people, characters use FaceTime, and a woman who looks suspiciously like Hillary Clinton is “The President”. Hopefully not all their predictions come true. But all in all it has a nice pace, especially considering its running time, so it adds up to being one of the better Nu-Image titles out there. It compares favorably to other 90’s Rutger future movies such as Split Second (1992). The end result is better-than-average DTV fare, especially for its late-90’s vintage (not the best time for DTV, for those who don‘t know).

Featuring the enjoyable and wonderfully incongruous end-credits song “Dub 1 Dub” by the Axel Boys Quartet, if you see Redline on DVD cheap, don’t be afraid to add it to your collection.

I agree. This was a solid movie. I have the UK version, which is called Armageddon. It seems like the producers were set on giving it a generic title.

Haha, so true. No need for an original title at all.