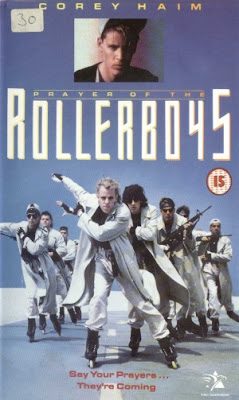 
In the future, the economy has collapsed and so the natural consequence of financial meltdown is increased rollerblade usage. In a world of anarchy, violence, gangs, drugs, lawlessness and uncertainty, Griffin (Haim) just wants to ‘blade it up in peace with his younger brother Miltie (Clark) and his friend Speedbagger (Harris). Trouble comes a-callin’ when Griffin’s childhood friend Gary Lee (Collet) grows up to be the head of the Rollerboys, a gang of murderous, drug-dealing thugs who skate in unison all over L.A. The cops see this as their chance to finally bring down the gang, so they recruit Griffin to go undercover as a Rollerboy. But Miltie gets too close to the Rollerboy lifestyle, and Griffin gets skittish. Especially with new drug “Mist” destroying lives left and right. All this while Griffin is trying to forge some sort of relationship with the mysterious Casey (Arquette). Will this Prayer be his last?

Prayer of the Rollerboys ushered in the 90’s in a big way: video stores were still huge, rollerblades were the future of being radically awesome, and everywhere you looked, skaters and snowboarders alike were slamming their Mountain Dews. The first word uttered in this movie is “Whoa!” - that should tell you everything you need to know. So it was perfect for its time, but ultimately this movie, like compatriots Shredder Orpheus (1990), Roller Blade (1986), and Roller Blade Warriors (1989), can all stand side by side as shelf-filler at your local video store. 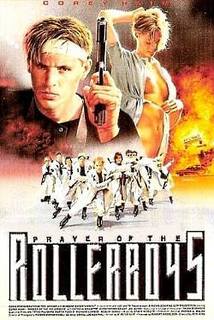 Corey Haim has awesome hair. But he also has plenty of charisma and screen presence. This movie would make a decent double feature with Gleaming the Cube (1989), especially considering Christian Slater would have been perfect for the role of Griffin, AKA “Griff”, “Griffy”, and “Ramrod”, other names by which Haim’s character is known in this movie. One of the main problems is that the Rollerboys just aren’t as intimidating as they should be. Their choreographed, simultaneous arm movements as they skate will remind you less of A Clockwork Orange (1971) and more of the sheer intimidation power of Brian Boitano. Plus, with names like “Gary Lee”, “Bango” and the truly fear-inducing “Bullwinkle”, they don’t inspire a lot of competence, much less the terror of a “para-military” and “international” criminal organization. And the idea of a sterilization drug has echoes of Challenge of the Tiger (1980), and, interestingly enough, the adult film Rollerbabies (1976) - which is itself a takeoff of the then-popular Rollerball (1975). But in the movie the Rollerboys produce their own comic book. So, there you go. 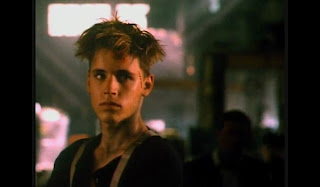 While the movie isn’t that bad for a non-Italian post-apocalyptic direct-to-video time/shelf-filler aimed at the teen market, it gets pretty repetitive after awhile. At about the 55 minute mark, the movie begins to spin its wheels, much like a rollerblade itself. But director Rick King followed this up with his next movie, Kickboxer 3 (1992), which is a huge improvement. That movie is more of an audience-pleaser and avoids some of the clunkier moments herein. Live and learn, that’s what we always say.  We wish the kid who played Miltie, Devin Clark, did more acting work. He was really good as Miltie and showed a lot of promise. What happened to him? Additional kudos go to the great Julius Harris as Speedbagger.

While it probably works best now as a nostalgia piece, Prayer of the Rollerboys, despite its flaws, might work for you if you’re in the right mood.

Great review. Love the line about them being as intimidating as Brian Boitano.

Prayer of the Rollerboys is an awesome... wait, wrong word... radical movie. So very, very 90s.

Haha, this was pretty rad at times. Classic early 90s.

Haim should have made more action movies like this...he will be missed.

Hmm, haven't seen those. Are they good?

Yeah they were pretty entertaining, all three of them were released on a trilogy set: http://www.amazon.com/RB7-Roller-Blade-Seven-Trilogy/dp/B009W7XXQ0

Thanks for the link!

With a cover like that, who even needs to watch the movie?

Answer: I DO. IMMEDIATELY.

The next stage of your obsession would be to purchase a pair of rollerblades and start Haim-ing it up immediately.

lmao, I have to see this. If for nothing else, just to see them skating in unison.

Haha! It is one of the best moments.