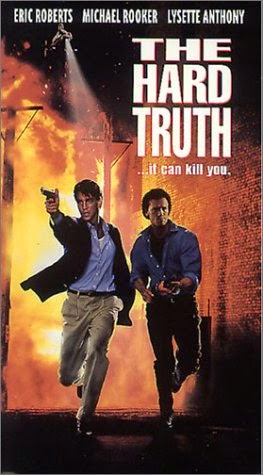 Jonah Mantz (Rooker) is a hardworking, brave, and honest L.A. cop, who, thanks to his rogue ways, gets suspended from the force. Seemingly instigated by his girlfriend Lisa (Anthony), Mantz embarks on a scheme to steal a ton of money from Lisa’s boss, a corrupt city councilman who is on the take from the mob. In order to pull this off, the two enlist the help of the smug Dr. Chandler Etheridge (Roberts), a guy who looks as arrogant as his name. Henceforth, a bunch of capering goes on, with plenty of twists, turns, and double-crosses along the way...will this love (?) triangle turn deadly? Will we ever find out the...HARD TRUTH?

The truth is that this movie is pretty hard to watch. Looking at the VHS boxcover (released by Live Home Video), we see fan-favorites Rooker and Roberts holding guns, while some sort of fire/explosion occurs behind them, complete with a helicopter above them, adding extra production value to the scene that does not ever materialize (could those be different heads pasted on bodies?).

While something of a bait and switch, The Hard Truth is not really an action movie. There is an enjoyable and impressive action setpiece in the beginning, and that’s pretty much all we get, and that hurts. What follows is a bunch of gobbledygook about city council members and whatnot. To be fair, there’s a little more to it than that, but that’s how it felt. There are plenty of boring parts where the audience doesn’t care about what’s going on. There should have been more action scenes like the one that kicked off the movie so well. 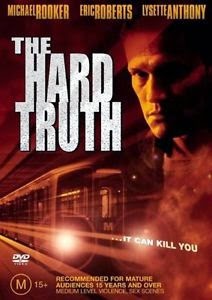 Rooker was engaging as the lone cop good guy, and it was nice to see him as a protagonist. He even has the most amount of hair we’ve seen to date. But he can’t save it. Roberts was also good as Etheridge, but, again, this whole outing is a waste of the two talents.

At 100 minutes, it becomes a slog, and the inexplicable overabundance of Rooker nudity and sex scenes surely contributes to the overlong running time. The whole thing is indeed classic 90’s - the type of thing you’d see on HBO or languishing on a video store shelf - complete with a WYC (White Yelling Chief) demanding Rooker’s gun and badge, sax on the soundtrack, characters yelling “Nooooooo!!!”, some light shootouts, etc. Judging by the evidence, it was a time when ads for Bugle Boy jeans were rampant. But in 2015, The Hard Truth doesn’t have the same watchability factor as it might have back then.

Director Peterson went on to make Kickboxer 5 (1995) the next year after this - perhaps she wasn’t satisfied wasting a once-in-a-lifetime (so far) acting “dream team” like Rooker and Roberts, and wanted to over-extend an already over-extended movie series. If the action setpiece is on Youtube, watch that, and then you’ll have no reason to sit through all 100 minutes of The Hard Truth. A 100 minute documentary about wrestler R-Truth would be more satisfying.

This was OK but forgettable.

If it had the same energy as the opening action scene, this could've been fun.