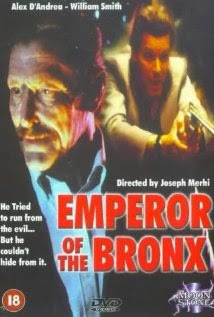 
Tony (D’Andrea) and his friend George (Ganis) are two buddies in NYC scraping by as small-time hoods. Tired of “nickel and diming it to nowhere”, they decide to up their wannabe gangster game. This lands them on the bad side of local boss Falco (Gioia) and some tragedies ensue. Seeking a fresh start, Tony relocates to L.A. and attempts to break into the nightclub biz. There, he falls under the aegis and mentorship of grizzled old salt Fitz (fan favorite Smith). Tony ends up working at the American Dreamer club, and falls for the nightclub singer there, Sandy (Sukary). But will he give up on his gangster aspirations because of his new influences, or will he sink further into them?

Bright lights! City Lights! I’m talkin’ ‘bout my Emperor of the Bronx! Apologies to David Lee Roth aside, ‘Emperor is an earnest, serious-minded gangster drama whose main influences appear to be Mean Streets (1973) and Scarface (both 1932 and 1983 versions). We would say Goodfellas (1990) as well, but it’s pretty clear the movie was in production before Goodfellas, because (and we always note these if possible) movie marquees are seen showing that they are playing Colors (1988), The Serpent and the Rainbow (1988), and Shakedown (1988).

While the action and violence overall are pretty muted - though they are there - the pre-PM City Lights team wastes no time with their soon-to-be-trademark middle of the street car flip, and, in a movie highlight, it happens right in front of another movie theater marquee, this time for Above the Law (1988). Almost as if to say, “that’s not action, this is real, honest-to-goodness, low-budget action.” But were they successful? Hmmmm....

Once again, the PM team - the names we’ve seen in the credits countless times such as Pepin and Merhi, Addison Randall, Charla Driver, and the rest - show the resourcefulness and the aspirational qualities of making a low budget movie. They go for grit and seediness, and generally achieve it. The outcome is something of a cross between Club Life (1986) and DaVinci’s War (1993), but without the “homless” vets, of course. Another interesting influence seems to be Alphabet City (1984), but unfortunately they brought some of that movie’s aimlessness along with them.

There are a few punch-ups and blow-ups along the way, but Tony is a bit too prissy to be a strong central character the audience can really rally behind. He can barely hold his own against a pudgy middle-aged man in a half-shirt, and William Smith has to come in and save his bacon. If he can’t hack it against yet another mob of Middle-Aged Punks, what hope does he have anywhere else? 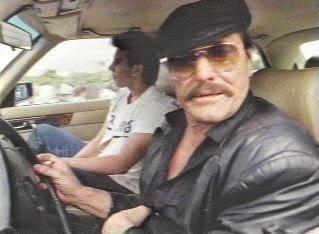 The band in the movie, known only as “American Dreamer Club Band” gets a ton of screentime. Almost a whole concert, with multiple songs. They’re sort of a cross between Miami Sound Machine and Animotion. Everyone in the band is extremely stylish, and the lead singer even wears - and we’re not making this up - a sole banana on her head. One banana. You could see how Tony could fall madly in love with her. Hey, it was the 80’s. Anything went, and there were sax solos galore.

Notably, one of the keyboard players in the band was the great John Gonzalez, who composed the music for this and practically every other PM movie. That also includes the title song for this, which is probably overall the best aspect of the movie. Sung by Marcus Malone, it’s a powerful, catchy tune that would fit in well on any Rocky soundtrack. As we all know, energetic songs with interesting-looking band members help movies. But ‘Emperor is already lengthy, and maybe the ADCB was too much of a good thing?

Someone who won’t be singing anytime soon is the great William Smith, who is too busy gargling with razor blades. Now HE has a voice - instantly recognizable, yet barely discernible. He truly is a character all his own. You can’t help but love the guy, and he helps the movie a lot. Also to the movie’s credit are some nice NYC and L.A. locations, but on the whole it should have been edited down by about 15 minutes or so. If you’re into low-budget filmmaking, gangster dramas or William Smith, the movie is worth checking out, but it may try the patience of the rest of humanity.