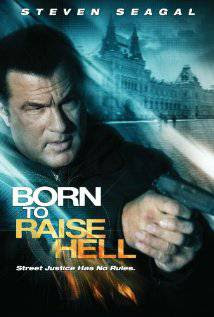 
Our old buddy Seagal plays Robert “Bobby” Samuels, an agent for the “IDTF”, or International Drug Task Force, in Romania. When a psycho named Costel (Shahlavi) begins going around raping and killing people, not only does this upset Bobby, but it also tees off a criminal overlord named Dimitri (Badarau) whose toes Costel is stepping on. Despite initially being rivals because they’re on opposite sides of the law, Bobby and Dimitri enter into an uneasy alliance so they can both achieve their aim: stop Costel. Will they accomplish  their goal, or will they succumb to the depression of Eastern Europe? Dare you find out...?

In 1994, Motorhead, Ugly Kid Joe, and Ice-T all teamed up for the song “Born To Raise Hell”, which featured on the soundtrack to the movie Airheads, released that same year. Presumably they weren’t singing about Steven Seagal, but there are plenty of airheads in this run-of-the-mill latter-day Seagal DTV yawner. Perhaps Seagal himself is still bitter he wasn’t invited to perform on the track, as he is a musician, don’t’cha know. He’s really got the blues. One minute he wants to be an Asian Martial Artist, the next minute a Black bluesman, the next minute a Southern “Lawman”. Anyone but himself.

Our working psychological theory for now is that
Seagal is constantly running from his true self, which is why he constantly uses voice and body doubles as well. What he’s running from, we don’t know.  But he should run more often (we’ll try to keep the fat jokes to a minimum, but no promises). 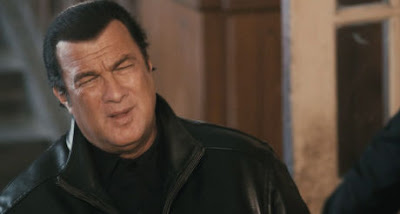 As for the movie itself, it has that bleak Romanian DTV vibe regular viewers will recognize by now. To its credit, it doesn’t hide the fact that it was shot in the land of Vlad the Impaler and pretend it’s New York or something, but Seagal more closely resembles Count Chocula than anyone else more fearsome. Maybe his next movie will be a ghost story where he takes on the title role of Boo Berry.

Born to Raise Hell just presents us with more depressing, soulless brutality served up as undemanding entertainment for less discerning viewers. Sure, it’s all tempered by the fact that we can now gauge the BMI of Seagal’s stuntman and Seagal himself is always shot with these bizarre shadows on his face, but none of this muck is really floating our boat as viewers. Seagal (or whoever is doing his ADR) is a bit more animated and less whispery this time around, but you’ll still need the subtitles on the DVD if you want any hope of knowing what people are saying. 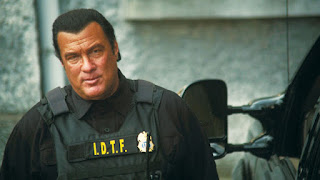 It’s loaded with those quick-cut editing effects that are inexplicably used by moviemakers of the modern DTV era. Unless it’s all a conspiracy by LensCrafters and Pearle Vision Centers working behind the scenes with them so we all need glasses after watching a few DTV’s, there’s no reason for them to exist. They’re not cool, they’re just annoying.

The same could be said for the dumb dialogue said in this movie, and what Seagal says is not tough-sounding, and doesn’t add to his image. It just makes him look like a cross between Eddie Munster and a walrus in an oversized leather coat. He ends most sentences with the words “boy” or “man”. Evidently he is judging how mature you look, which is just creepy.  After the second half of the movie, it just spins its wheels, nothing noteworthy happens and you’re mentally checked out and thinking about what you’re going to be eating for dinner that night. Not unlike...well, you get it.


While we appreciated the presence of fan favorite Shahlavi as the baddie, and perhaps the quick-and-silly fight/action scenes, we just thought it was typical crude oil from the Seagal spigot. Seagal fans may defend this one, as they are wont to do, but we just weren’t feeling it.

Also check out a write-up from our buddies, Cool Target and DTVC

I agree that “run-of-the-mill latter-day Seagal DTV” is the best way of describing this movie. Most of his latter movies have unmemorable, indistinguishable plots. Seagal is perhaps not running but slowly ambling away from his life as an action star.

I’ve noticed that native English-speakers always say that they have problems understanding Seagal and his ADR voices. Curiously enough, I’ve never had a problem with this, but I guess I’m used to all kinds of weird European accents.

By the way, did you know that Blockbuster Video is alive and well in Scandinavia? No video stores, but the brand name was bought by a Danish online video rental company. They have a commercial in Finland with a guy standing in his pyjamas speaking in Finnish: ‘I always sleep well... but I sleep best while watching movies... especially action movies... and especially movies with Steven Seagal.’

We totally agree about the ambling, that's a good way of putting it. People in Bulgaria must really understand him clearly. It's no wonder his movies seem to more accepted in Europe.