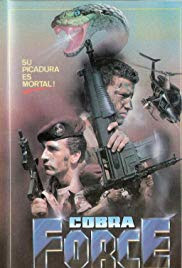 
In Africa, an evil group of commies wants to, and we quote, “force Gamba to break international relations with Anzala.” What does this mean exactly? Well, from what we can tell, Gamba and Anzala are two fictional African nations. When the dastardly Comrade Cornel dispatches his two best (or should we say worst) commies, Courac (Radebe), and the Cuban Gomez, to kidnap the ambassador to Gamba’s daughter, things get real. True South African Hero Captain Holmes (Calder) is tasked to rescue Mr. Masada’s daughter and restore order in the area. To do this, he takes some prisoners who are on death row with him on this supposed suicide mission. If they succeed, their sentences will be commuted to “life with special privileges”. Still seems kind of harsh, but that’s the way the Angolans roll, apparently. These men, Gronsky, Manny, and Baby Face, are up to the task, but they find an abandoned young boy along the way and they take him with them. Will the COBRA FORCE release the ultimate deadly strike?

Cobra Force has a lot of what you might call “third-world charm”. Sure, they might not have had access to A-list actors, top-notch technical equipment, or powerful Hollywood resources. But they didn’t care. They made their movie anyway, and God bless them for that. This homemade, homespun feel comes across mostly in the editing. It’s almost Godfrey Ho-esque at times: there are the sections that are edited (relatively) normally, and then there are the other, seemingly unrelated parts that look like Vince Offer got a hold of the film and went hog wild with his Slap Chop. Or possibly his Graty. Or maybe both. To top it all off, there are some “my first editing machine”-style transitions that are the next best thing to star-wipes.

There is some classic repeated footage, and every time text is on the screen, something funny happens. For example, the words “KGB – Angola” stays on the screen for a comically long amount of time, the movie is brought to us by a company called Afrovision, and the title Cobra Force is in quotes. Sorry, “Cobra Force”. As for the action, there are a lot of shootings and chasings, and in the unrelated parts some people crash through windows. It’s all set to a pretty funky score by Tony Rudner and you have to appreciate the effort that went into all of it. However, things slow down considerably after the second half, where our heroes do a LOT of walking across the savannah. At a certain point everything stops and it becomes walk, walk, walk for an extended period of time. It’s pretty uneven, but that’s all part of the Cobra Force experience.

Featuring an extremely catchy (and somewhat strange) end-credits song which mentions the words Cobra Force in its lyrics (we always appreciate movie songs where the title is included), Cobra Force is an example of what filmmakers off the beaten track – WAY off the beaten track – in other countries can do if they have a bit of ingenuity and want to make an action movie. Its amateurish ways are enough to entertain you more than a lot of professionally-made products. We say give it a chance.