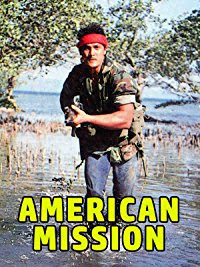 
Get ready for more Godfrey Ho madness as Mr. Ho tries his hand at a full movie for this outing and not a patchwork quilt. That being said, perhaps he should have gone with his more famous cut-and-paste method this time? The plot, as far as we can tell, is this: There are some pro-American soldiers named Woody, Tom Thompson, and Alexander Samson. Maybe it’s because of his name, but it is determined that Samson is the best of the bunch and so he goes undercover in the Commie People’s Freedom Army in order to infiltrate the group, and he travels to Malaysia to do so. Once there, he meets the leader of the PFA, Abdul, who takes a liking to him. After spending time at the Bangsa Moro training camp, he is then shipped yet again to Commander Hajiman’s unit. It’s there he meets the core soldiers of the PFA: Ahmed, Chico, Jerry, and Terri. Trying to thwart the AMERICAN MISSION is a blonde guy with strange speech patterns named Commander Victor, and his second-in-command, Sanderson. All of what you just read is just window dressing for the endless scenes of shooting machine guns in the jungle. Will the AMERICAN MISSION succeed?

If you like unnamed, unidentified people shooting machine guns at each other in the jungle, you will love American Mission. That could get boring after a while, and it kind of does, but because of the insanity with which the interstitial dialogue scenes are executed, the viewers’ interest is kept, but just barely. If you’ve seen Godfrey Ho movies before, you know what we’re talking about and know what to expect. The movie is kept afloat in large part because of the dubbing. The voices put into the characters’ mouths are very silly and ridiculous. Most animated cartoons for kids don’t have such over-the-top ludicrous voice work. So when these very silly people are then shooting and grenade-ing each other into oblivion for many minutes at a stretch, you can’t help but be sucked in to the vortex of sheer senselessness.

When the two sides are shooting at each other, you honestly can’t tell who is who, what side they’re on, or what political cause they’re fighting about. Apparently both sides believe the key to achieving their political aims are to blow up as many huts as possible. Clearly that will change the course of the world geopolitical situation. We also appreciated the multi-colored smoke bombs on display. Of the many smaller-sized blow-ups, instead of the standard white, gray, or even black, here we get orange, purple, and blue as well. It added a visual difference that we appreciated. There should have been more things like that (though the guy with his arm in a cast with a gun was a nice idea as well).

Every now and again in the movie, there’s a white title card saying where we are. Unfortunately, it’s white text set against a largely bright background, so we as viewers can’t read it. It appears on the screen for only a fraction of a second anyway, so it’s kind of a wash. Maybe it was meant to be subliminal.

While the movie itself is all of one piece – which Godfrey Ho later perfected with gems like Honor and Glory and Undefeatable – the music score seems to be a return to his classic patchwork way of doing things. No one person is credited with an original score, so it’s reasonable to assume this. The music is really fun, yet another indication that the audio aspects of this movie are more entertaining than the visual ones, for the most part. If it wasn’t for the colored smoke bombs, you could almost listen to this movie on the radio.


American Mission is approximately the 40th movie Godfrey Ho directed…in 1988. This fact is almost as ridiculous and hilarious as many of the movies he puts out. If nothing else, you have to respect his work ethic. As for the movie itself, the VHS (or the, oddly enough, German DVD) should come with a sticker on the front: “Must Love Nonsense”. If that’s cool with you, do embark on the AMERICAN MISSION!

Tell me it's better than American force 3 high sky mission. Don't get me wrong I have a soft spot for Godfrey Ho. But that film bored me to death until the final show down in the end. I couldn't find American mission online. Is it known by another title?

We haven't seen American Force 3 High Sky Mission, we'll avoid that one for now! This movie is also called Solider Terminators. On Amazon Prime, this was called American Mission.

For one of the best Godfrey Ho's check out Clash Of The Ninjas! Some hilarious stuff happens in that.