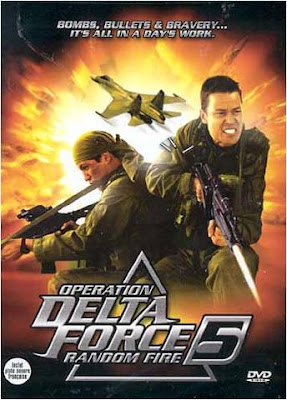 
When Ambassador Clarence Rodman (Scott) – who probably isn’t related to basketballer/honorary North Korean Dennis Rodman – is on a speeding train somewhere in Kenya, things start to look bad. Little does he, or anyone else, know that super-evil terrorist mastermind Jafari Bin Kasim (Caprari) is on the loose. So, naturally, the DELTA FORCE is sent in. Let by Captain Kennedy (Thomas) and Sgt. Johnson (Jensen), the boys get involved in endless firefights and bombings in and around Kenya. When certain people are held prisoner by Jafari – who probably isn’t related to the bad guy from Aladdin – Kennedy wants answers, but he’s not getting any info from the military brass. After a wave of suicide bombings in America, the DELTA FORCE decides to go back to Africa to save their missing compatriots. Will they hit their mark? Or will it just be a bunch of RANDOM FIRE?

OPERATION DELTA FORCE 5: RANDOM FIRE is a cross between a generic and characterless Nu Image modern-day war actioner and a movie that can predict the future. Sure, there are the endless, repetitive shooting/blow up scenes we’ve all come to expect, but let’s keep in mind this has a copyright date of 1999 and was released in 2000 – and it features a terrorist using a plane to crash into something as a weapon of war, there are many sleeper cells and suicide bombings, and there is a Boston bombing. All pre-9/11. So, pretty impressive for a DTV war movie with nothing else to distinguish it.

The audience knows Jafari Bin Kasim is evil because:

- He has a ponytail

- He looks like Al Pacino after a night of binge drinking

- His name is Jafari Bin Kasim

- He pronounces the word “missiles” as “misSYLes”

…among other rather obvious clues. The movie needed more Jafari. And even during the Jafari we did get, most of Jafari’s face is obscured by bizarre and unneeded close ups while he’s looking through binoculars and singing “Glory, Glory Hallelujah” as the signal to ignite his suicide bombers. While he was onscreen, at least there was some mild tension and/or lack of boredom. But the filmmakers must have thought audiences would be okay without him.


In classic B-movie fashion, all the people we see look like other people. Is that Anthony Michael Hall? No, it’s Trae Thomas. Is that the guy from Seinfeld? No, that’s…someone else. Is that Todd Jensen? No, that’s…Todd Jensen. After seeing many movies with him, we’re still not sure what he looks like. 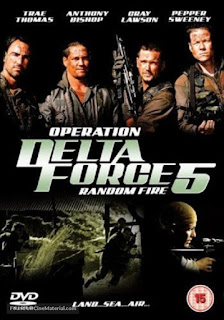 While there are a lot of war clichés, there are also plenty of things action movies used to have back in the good old days: exploding helicopters, guard tower falls, guard tower explosions, repeated footage, borrowed footage, and stuff like that. But it’s not enough to make the movie interesting or worthwhile. Some characterization might have helped. Just a thought.

However, our favorite character comes along towards the end of the movie. We don’t think he has a name, but we could be wrong. He’s a guy shooting a machine gun out of a helicopter. The top half of his face is obscured by his helmet visor. He displays no emotion whatsoever, never says anything, and never changes his body position or his gun position. He’s just an unsmiling, seemingly random guy with a gun who can’t be bothered to do anything else. It was pretty funny…if you ever see this movie, lord help you, you will recognize him based on our description, we’re sure.

Oh yeah, one more thing. Please allow us to quote from the back of the TVA Films (Canada) DVD box. It says, in part, after attempting to describe the plot for a few sentences: “The inquiry is interrupted when news arrives that the three men left behind are now being held prisoner in Angola by terrorist Osama Bin Laden.” Wait a minute. Are they allowed to do that? We were led to believe old Osama himself would make an appearance in this movie. So, naturally, like any sane individual, we purchased the DVD at the library store for two dollars. It could just be that the box-writer was confused by the actual baddie’s name, Jafari Bin Kasim, but the only similarity is the “Bin”…which is exactly where this godforsaken DVD should rightfully go.

We kid, of course, but no Osamas are to be found. The main selling point is a sham. That’s classic exploitation for ya. Well, anyway, best just to avoid this movie and move on with your life.

I didn’t think it was that bad. It’s on par with countless other Italian or Filipino movies with loads of action and zero character development. Parts 2 and 4 were the best ODF movies IMO.