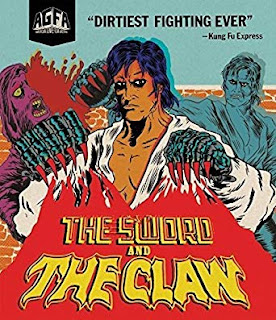 In Turkey at some point in the historical past, armies are fighting. When King Solomon (presumably not the biblical one) is killed during one of the conflicts, his son is spirited away to safety in the forest. While there, he is raised by lions and develops awesome strength. Of course, the new regime is still in place. Lionman, as he becomes known, develops friends amidst all the turmoil and intrigue, and they are in trouble. During a fight, Lionman’s hands are burned with acid, so he asks the local blacksmith to make him a pair of iron claws. That’s when he really gets mad and goes out for revenge. Who will win, the SWORD or THE CLAW?

THE SWORD AND THE CLAW is a ton of fun and highly recommended. The last time was saw anything from Turkey, it was Cellat (1975). But, rather than be a “Turkish Death Wish” as that film was, ‘Claw is more reminiscent of The Devil’s Sword (1984) from Indonesia. It’s a wild, wacky, and dare we say exotic adventure. Arkin plays a nonverbal Tarzan crossed with a hulking, violent Zorro. And it’s all filtered through that lens of Turkish films from the 70’s that seem quite bizarre to our modern-day Western eyes, and that provides a lot of the entertainment value. 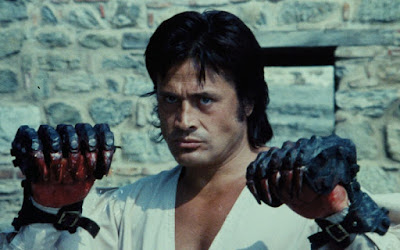 Of course, it has funny dubbing and messy edits as befits a drive-in-style movie. We wouldn’t want it any other way. There are also some colorful sets and many characters have some pretty fantastic headwear. Lionman sports wicked fighting moves and the ability to seemingly defy gravity with his powerful jumps. Before ‘Claw, the killer from Blood and Black Lace (1964) had a spiked glove, and after this movie, there was the guy from The Glove (1979), and Freddy Krueger of course, but Arkin may be the first in movie history to have two spiked gloves, and what he does with them is downright impressive. It’s a new kind of silly/violent swashbuckling. It works well in the atmosphere of arrow shots and sword slices.

Thank goodness for AGFA, who released this gem on Blu-Ray. We’re lucky to see it, and it seems they rescued this movie from oblivion. Or, at the very least, they made it easy for the rest of the world outside of Turkey to see it. If you’re not familiar with them, check them out at americangenrefilm.com.

Anyway, for those interested in the more peculiar and/or foreign end of the action spectacular, The Sword and the Claw is a satisfying watch and a worthy addition to any Blu-Ray collection.

Email ThisBlogThis!Share to TwitterShare to FacebookShare to Pinterest
Labels: 1975, Cuneyt Arkin, Lionman, The Sword and The Claw