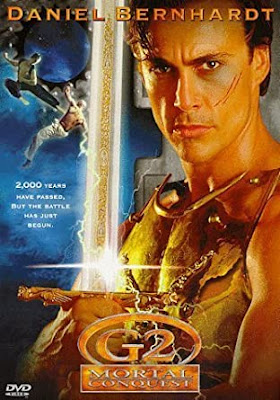 The battle for Alexander the Great's sword is on...again! That's right, as if Gladiator Cop: The Swordsman II (1995) wasn't enough for you, never mind The Swordsman (1995), here we get the third and final (?) installment of the supremely silly series. As you'll no doubt remember, in Gladiator Cop: The Swordsman II, James Hong as Parmenion and Lorenzo Lamas as Andrew Garrett were reincarnated figures who had recollections of their past from hundreds of years ago as they tried to get the sword. Meanwhile there were Punchfighting matches in parking lots.


This time around, in G2, James Hong as Parmenion and Daniel Bernhardt as a man named Steven Conlin are reincarnated figures who have recollections of their past from hundreds of years ago as they try to get the sword. Meanwhile there are Punchfighting matches in warehouses. This may seem a little familiar. You'd think after three movies, coherence would somehow emerge. It doesn't, but James Hong has a variety of stylish hats. Will the MORTAL CONQUEST finally reach its end?

Writer/director Nick Rotundo seemingly has a burning desire. A desire to tell the tale - repeatedly over the course of years - of the sword of Alexander the Great, Parmenion, and someone trying to get the sword. Rotundo's quest is almost as long and labyrinthine as the saga of the sword itself.
Just why he thinks this story is so interesting, and why he's willing to more or less make three movies about it, at the cost of whether any of them make sense or not, has yet to be explained. But he sure has a lot of what you might call 'stick-to-itiveness'. Even the name "G2" seems to indicate that this is the true sequel to Gladiator Cop. Maybe he doesn't like Gladiator Cop: The Swordsman II, which is a shame, because that was the moment when nonsensicality became real entertainment. 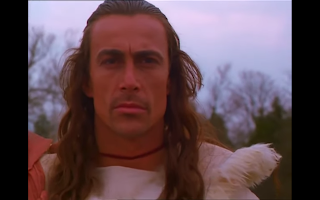 Starting with a John-Woo-on-a-budget intro, we then soon realize we're in Adrian Paul-era Highlander territory. Like all good stories about reincarnation, there are repeated Punchfighting matches. Just what meatheads pounding on each other has to do with Alexander the Great only our most venerated historians can tell us. Some of the guys seem like they would be at home as contestants on The Running Man, including one who has some sort of breastplate that shoots fire out of the sides. Jesse Ventura should have been involved.

Rather than explain any of the above with dialogue, the men in the movie make a panoply of silly sounds. These sounds include, but are not limited to, yelling, screaming, shouting, grunting, yelping, hollering, bawling, howling, yowling, screeching, and ululating. Someone in a warehouse hits a gong, and off they go. Do not make a drinking game out of any time someone says, and I quote, "BwwoaaoooaaaahhhhhhAAAAAA!!!!!

Some of Parmenion's goons have a pretty novel method of deflecting bullets. Actress Meeka Schiro was in the Zagarino outing The Protector (1998) the previous year. Other real people from the cast include men with the names John Bonk and Chris Chinchilla. It's not that bad. It's just disjointed and jumbled, in classic Rotundo style.


G2 (AKA Mortal Conquest) won't make much sense to anyone, regardless of whether they've seen the other "G" movies or not. As a cross between Highlander, The Running Man, Excalibur, and a Shirley MacLaine autobiography shot on a low budget in Canada, it works about as well as you might expect.

Comeuppance Review by: Brett and Ty
Also check out a write-up from our buddy, DTVC!
Posted by Ty at 20.1.22