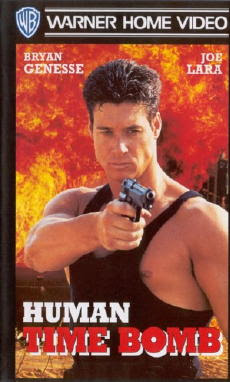 Parker (Genesse) is your classic wisecracking FBI Agent. While not afraid to shoot or blow up things and get in the middle of the fight, he quickly becomes embroiled in U.S.-Cuba relations on his latest assignment. In the middle of groundbreaking trade talks between the two countries, a woman named Gina Young (Brooks) approaches Parker about her brother, who is being held prisoner in Cuba. Seeing as Parker just took down some dastardly drug dealers from there, the two head down to rescue him.

Seems like a rather straightforward mission, but the only problem is that the evil Price (Lara) has injected a newfangled computer chip into several fighters from around the world, turning them into his own personal army. Parker himself has been implanted with the chip along with them, and he has to fight against not just the baddies, but his own identity as well! Will he be able to fight the baddies, rescue the Young family, and save a much-publicized trade delegation from a...you guessed it...a HUMAN TIMEBOMB? Well, It's really just a guy in what we might call today a suicide vest, but it sounds a lot cooler to call the whole thing LIVE WIRE: HUMAN TIMEBOMB. Will it blow up in Parker's face? Or will he save the day after all? 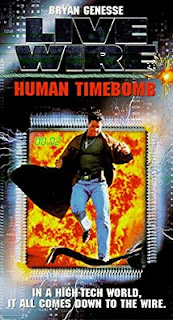 LIVE WIRE: HUMAN TIMEBOMB is probably the best Bryan Genesse film we've seen to date. Around this period he seemed to be one of Nu Image's go-to guys, and here he finally gets a showcase for all his talents. He gets to be the smart-aleck FBI agent on the one hand, and a ruthless killing machine on the other. It's more or less a dual role. Plus, he gets in on a lot of action throughout the course of the movie. There's a lot of blow-ups, shooting, and fights, and Genesse is there for almost all of it.

It all starts out with one of the more explosive Drug Deals Gone Wrong we've seen in some time. We know they don't usually go right, but this one provides more firepower than usual. And who wouldn't be intimidated by that guy on the right? I'm scared just looking at him now, and this is a DTV movie from 1995. Imagine seeing him in real life. 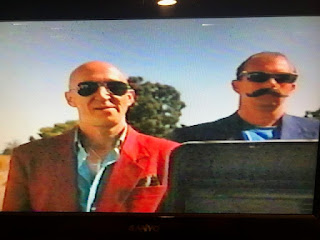 While the idea of a chip (everyone's looking for the "other" chip in the movie - apparently there are two of them) that can turn already-vicious bad guys into supersoldiers is a good idea, and there is a lot of commendable stunt work throughout the film, around the hour mark things slow down considerably. It would have been hard to keep up the slam-bang pace of the opening sequence.

The Bryan Genesse-Joe Lara fight in the kitchen at the end was the fight we've all been waiting for, and it's a good one. It was enjoyable to watch these two duke it out. It was nice to see J. Cynthia Brooks get in on the action, as we'd last seen her in Coldfire (1990). She was a welcome addition to all the Genesses and Laras we know so well.

Director Mark Roper is no stranger to the site, as he's been behind the camera for several Gary Daniels films that we've enjoyed. The movie was shot in Roper's native South Africa, and it was his first action movie. He improved with his series of Daniels outings, but LWHT is a more than respectable opening salvo. His main error was making the running time 98 minutes. If the movie was shorter, it would have helped things along a bit better.

Interestingly, in some places this is known as Live Wire 2: Human Timebomb, presumably a sequel to the 1992 Pierce Brosnan movie Live Wire. In other territories, it is not a sequel. It's just a movie with a cool title. In the end, however, LWHT stands on its action scenes. They're well-executed, but seemingly the plot can't withstand the 98-minute running time. With a little editing, we'd be dealing with something outstanding. As it is, it's good. Better and worse movies would come from Both Genesse and Roper, but this one is entertaining enough.
Comeuppance Review by: Brett and Ty
Posted by Ty at 28.1.22