First off: "Eye See You" is a terrible name for a film. An investigation proved that wasn't the real title. It's "D-Tox". Another one for it was "The Outpost". With a title like "Eye See You", no wonder this was on the shelf for almost 4 years. It was supposed to be released in 1999 by Universal, but they dumped it from their schedule and their company all together. They sold it to DEJ Productions and they put it out on video. 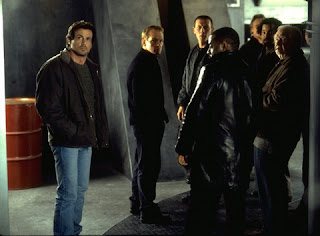 Poor Sly. He puts in one of his better performances here.  He plays FBI Agent Jake Malloy. When a serial killer claims his girlfriend, Malloy goes into a drunken stupor. He is sent to a D-Tox program for other alcoholic cops in a remote part of the snowy wilderness. Unfortunately, the killer has followed him there and he's picking off the cops one by one. Can Malloy save the day? 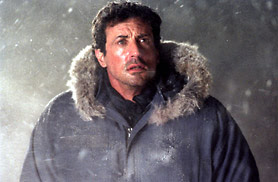 The movie is well-acted, but the writing could've used some work. For example, if you look at the above picture, you can probably hear Sly's voice uttering the words, "Yo, I'm Cold.". The huge supporting cast get their time in the sun, but the best part is the silly ending.

If you like Stallone or the serial killing genre, it's worth watching.