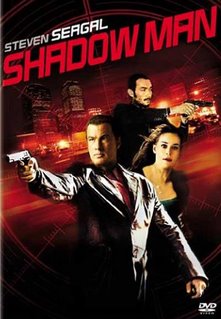 
I'll repeat this again: I like Seagal. But he's not trying anymore. You got the photoshopped head on the covers, retitles every two seconds, and the big man once again shows he's not going to World Gym. I have a Steven Seagal DTV addiction. I need to go to S.S.A. {Steven Seagal Anonymous}.

This time around: Jack Foster (You know the guy I'm talking about) is an ex-cop on a mission to save his daughter from terrorists. Same old, same old.

When Steve was making films with Warner Bros. in the mid 80's-90's, all of his films were professionally made. Now since 2001-present day, his films look terrible. They are shot in Romania or Bucharest or some foreign country with tax breaks. The green screen during the chase scene is horrendous. On the plus side it looks like Seagal laid low on the stunt doubles this time around, and the climax is unintentionally funny.

One more thing: You can make some lame jokes as his expense with the title: He's a "Shadow" of his former self, or he casts a big "Shadow". Your choice.