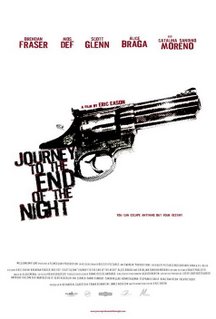 
Journey To The End Of The Night is a disappointment.

The plot: Paul (Fraser) is a pimp who lives in Brazil with his father Russo (Glenn). They have a drug deal planned. Their mule suddenly dies, and, desperate, Russo asks dishwasher Wemba (Def) to replace him. It doesn't go exactly as planned....

The whole movie feels rushed. Something must have been cut out because it feels disjointed. There's no way this movie is 85 minutes long. If it was 2 hours it would've been better. The actors are good however. Def impresses again with a good performance. Fraser goes a little over the top but it works for his character. Glenn is always worth watching. 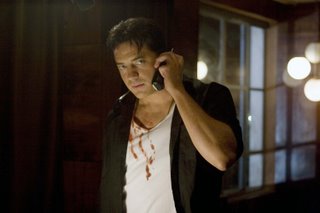 If you like the actors, JTTEOTN is worth seeing, but overall it's a minor disappointment.

I am equally disappointed. I was hoping this would be a movie version of Celine's Journey to the End of the Night. It's a seriously depressing/violent French book about WWI.

Sounds like the other Journey would make a decent film!