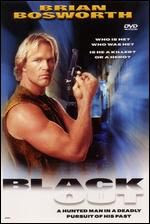 Directed By: Allan A. Goldstein

Brian Bosworth stars as John Gray, a successful banker. When walking to his car one day, while jammin' out to his Walkman, he gets run over in a funny way (which is worth a rewind). He wakes up in the hospital and remembers virtually nothing but has black and white flashbacks to his former life. (Which are shot in the manner of 30's style gangster films).

Once out of the hospital, he goes back to his wealthy life which he doesn't remember. His wife looks like Kathie Lee Gifford and he seems strangely unsatisfied. As his flashbacks become more prevalent, he goes on a quest for truth and you can always tell because he wears a trench coat throughout the movie.

Meanwhile, local dandy villain Thomas Payne (Dourif) is the leader of a gang of multiracial baddies and after a prison break at the beginning of the movie, they start working out of a sleazy dive in L.A. (is any other kind of dive?) There is a grudge between the gang and "Da Boz" revolving around a past life in jail and a secret tattoo. With the help of a spunky cocktail waitress, Gray fights to take back his life!

Bosworth is perfectly cast as Gray, because it allows him to, throughout the whole movie, seem like a confused dunderhead, constantly making statements such as: "Huh?", "Oh Man!", "Aaaaahhh!" and the classic "Nooooooo!" One of its many alternate titles could be "Huh?": The Movie". One of the best lines in the movie is when Gray sees a crucifix on the wall and starts to remember something and says "Christian? That means something..." Depending on the angle, he alternately looks like Dolph Lundgren, Aaron Eckhart or Neil Patrick Harris. As a banker, he looks like a meathead stuffed in a suit with funny suspenders. 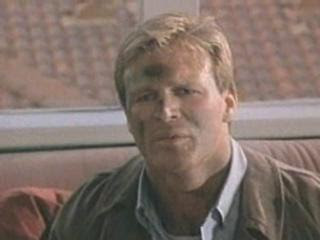 Brad Dourif seemed to relish his role as the hat lovin' baddie. ("You should wear the hat, the hat shouldn't wear you.") Let's not forget about one of Payne's minions who looks just like Sonic The Hedgehog's nemesis "Dr. Robotnik". Also when Payne threatens a Mexican bad guy at gunpoint he pleads for his "Bambinos" which is clearly Italian.

Seeing as the movie takes liberally from Robocop (1987) and Total Recall (1990), it is safe to assume the writers were influenced by Paul Verhoeven. On a bizarre note, there are a lot of allusions to the songs "Y.M.C.A.", "In The Navy", and "Macho Man". It is also safe to assume they were clearly influenced by The Village People.

At the end of the day, Blackout is better than average Direct-To-Video fare. Bosworth and the rest put in enjoyable performances.