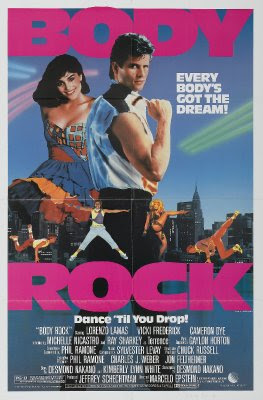 Chilly D (Lamas) is a kid (?) from the New York City streets who doesn't have a lot of money, but he has a big dream: to make it big with his crew of dancers and rappers, the Body Rock Crew. Through some streetwise tenacity, as well as a lucky break or two, Chilly achieves his dream: but at what cost? He stops "keeping it real" and starts spending all his time with these uptown snobs, forgetting his downtown roots. He even moves out of his old neighborhood and into a ritzy loft with his new, snobby lady...causing a rift between him and his true love, Darlene, not to mention alienating the entirety of his once-beloved Body Rock Crew. Will Chilly lose his soul and become a sellout? Or will he reconnect with his roots, and pop-and-lock his way into glory?

EVERYTHING about Body Rock is so incredibly great:

THE MUSIC is infectious, toe-tappin' fun (assuming you don't jump out of your seat and start breakin' right there on the floor), which actually, maybe because there wasn't a whole lot of available rap music at the time, encompasses a wide variety of genres: rap, dance, new wave and even powerpop are represented (Baxter Robertson's should-have-been-an-MTV-hit "Vanishing Point" and Dwight Twilley's - yes, Dwight Twilley! - "Why You Wanna Break My Heart").

THE FASHIONS: Where to begin? The whole movie is a whirlwind of half-shirts, zippers, vests with writing on them, multi-colored socks and Converse sneakers, leather, suspenders, headbands, bandannas, and on and on. The eye is truly dazzled by the clothes alone. Other highlights include Chilly's leather trenchcoat, symbolizing his new hoity-toityness, but still has "CHILLY" graffiti'd on the back, and Darlene's outfits, which either have letters or numbers stenciled on them. Not to mention the bouncer at the club, "Big Daddy", a man so obese, all the rules of the club are printed on the front of this shirt. I barely even scratched the surface. You have to see this for yourself! 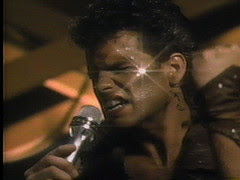 THE DANCING is nonstop: the film, while not a musical, is structured similarly - every 10 minutes or so there is a song and a dance sequence. No one is really here for the plot or the acting, so these are the best parts of the movie. This was director Marcelo Epstein's only feature film, as he is primarily known as a music video director, and here it shows very well. Body Rock is almost like a feature-length video, and I mean that in the best possible sense. A MAJOR highlight of the film is the show-stopping "skeleton dance" which is truly awesome. It might be the first case in movie history of "day-glo-slo-mo".


Also the huge boombox set of the final "rapstravaganza" where Chilly has to prove himself is very impressive as well. The little boy, "Magik" gets off some great moves and is very charming, especially when he's teaching Chilly how to dance, including the fan-favorite "sit-down dance". Also, the dancer in Chilly's crew that looks like "Reno 911"'s Thomas Lennon gives it all he's got and proves you can be a middle-aged white guy with a wife, kids and a mustache and still lay down some funky moves.

In addition to the actors, some real-life breakers, such as the NYC Breakers are shown doin' their thing.

NYC LOCATIONS: Keepin' it street, there are a lot of great NYC locations, captured beautifully in all their 80's glory for the world to see. From Brooklyn, to Times Square (where Once Upon a Time in the West and Romancing the Stone are playing at a movie theatre, I think where the Virgin Megastore later was, but I could be wrong), to Washington Square Park, and, poignantly, the World Trade Center Towers, and many other places in between, this lends a lot of interesting authenticity to the proceedings and delights the eye along with everything else about Body Rock. 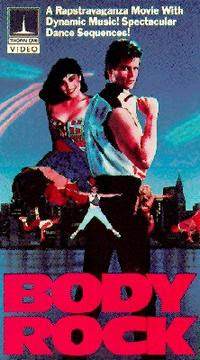 From the opening of the film, when the Body Rock Crew are dancing their way across the street, to the spray painting of the subway cars, to the dance sequences, to the training sequences, to Chilly's "downfall" where he becomes a pot-smoking lowlife, to the final "Rapstravaganza", you MUST see Body Rock. It's layer upon layer upon layer of impenetrable 80's awesomeness. Especially if you are an 80's freak like me, you will have a lot to feast on with the great and underrated Body Rock.

R u kidding? This movie is incredibly baaaad in a hilarious way.

Yes it is! It is a guilty pleasure!

Dude, I was totally unaware that Lorenzo Lamas (the Renegade! the Snake Eater!) did a dance flick! Watching this movie just became my #1 priority. Profound thanks.

You're very welcome, Michael! It is hilariously entertaining. Lamas at his best.

I just watched this movie yesterday for my upcoming Lorenzo Lamas marathon and I still haven't recovered. It was a rainbow of 80's awesomeness. There's so bad it's good. Then there's so bad it's Body Rock. My favorite part was when Lamas was strutting down the street breaking the fourth wall and telling the audience how cool he looked in his new coat. Arguably Lamas' finest screen moment (the opening monologue from Snake Eater comes close).