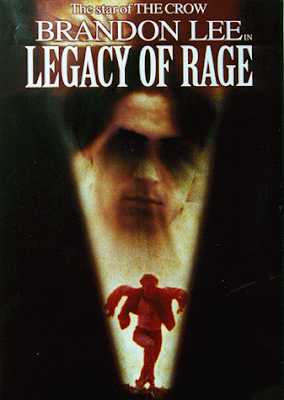 Legacy of Rage is an entertaining and interesting hybrid action/drama/prison movie and a personal favorite genre, revenge movie.

Brandon Lee plays Brandon Ma, a mild-mannered (that is, unless you push him too far) waiter with a loving and devoted girlfriend, May (Regina Kent). When Brandon's "friend" Michael, who is a gangster rising in the ranks, frames Brandon for manslaughter and sends him to jail for eight years, he thinks he can get in good with May (by attempting to rape her while she's pregnant, a great plan). In an intriguing plot development, while Brandon is in jail, May forges a relationship with an older gentleman who just wants "a companion" and offers to take her to Brazil.

Meanwhile, Brandon is rotting away, seething, in prison. He develops a friendship with an arms dealer named Hoi (Hoi Mang), nicknamed "Four Eyes" in the joint because he wears glasses. Even after Brandon gets out of a hard stretch in prison, Michael still makes Brandon's life a living hell.

Finally, enough is enough, and after a whole movie of a nice guy being stepped on over and over again, Brandon reconnects with Hoi and his huge stash of weaponry, and they go together on a violence-packed, kick-ass revenge mission against Michael's gang. Will Brandon get justice? Will he reunite with May? Will he be able to have a relationship with his estranged son?

Interestingly, the movie, at least in the English-speaking world, is called LEGACY of rage, obviously trying to link Brandon with his legendary father Bruce, as if that was really needed. Maybe it was just a marketing thing. But there IS plenty of rage! "Legacy of Rage" definitely delivers the goods. It has a good story, is well-filmed, has great action, brutal violence, a satisfying ending, and is all handled well, with energy, style and flair by director Ronny Yu. According to author Thomas Weisser from his great book Asian Cult Cinema (Boulevard, 1997): "This is the only made-in-Hong Kong movie with Brandon Lee. Reportedly, Brandon was reluctant to make HK movies because he was afraid of critical comparison between himself and his superhero father Bruce Lee" (pg.117). I would just add that I'm glad he did, especially in the great year for action movies, 1986. The timing couldn't have been better. I wish he did more Hong Kong action movies.

I love movies where the good guy is really good (he even helps a little girl in need after her mommy gets on a bus without her!), the bad guys are really bad, and the good guy doesn't want to fight, but he has to because he's taken too much crap for too long. This D&B (not "Dave and Busters", Dickson Poon's -- no smirking -- Hong Kong production company) falls into that esteemed category! 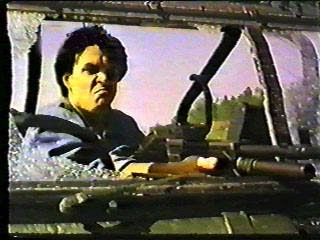 Fan-favorite Bolo Yeung appears very briefly (one short scene) in the beginning of the film as a gangster looking for protection money from the restaurant where Brandon works. It was nice to see him, and if I have one complaint about the movie, it's that it could have used more Bolo.

But on the whole, I would heartily recommend Legacy of Rage.