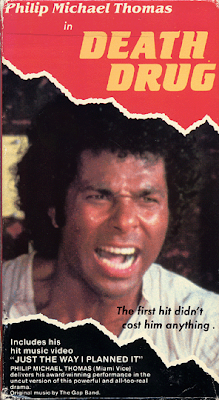 
Haphazard, half-assed and wholly hilarious, Death Drug is a classic for the ages. After witnessing this barely-feature-length PSA, you’ll never touch “wack” (the name of the evil drug in the movie) again!

Jesse (Thomas) is a good-natured L.A. plumber with big dreams of making it in the music industry. One day he is at home with his wife and he gets a letter informing him he was accepted to a prestigious musical conservatory (he must have sent them a copy of his composition “Just the Way I Planned It”). Coincidentally, he also gets a letter saying a record label wants to sign him. Obviously, Jesse is ecstatic, so he does what any sane, rational person would do at the time: he takes his wife out to a club to see The Gap Band (and then, unexplained, he plays a few songs with the band).

While there, Jesse decides to take a bathroom break from four songs worth (The Gap Band is great, but this does pose some pacing issues for the movie) of gettin’ down with his bad self. After washing up, Jesse runs into an insidious, but very slick drug dealer. His rhyming salesmanship convinces Jesse to try the latest craze of the drug world, “wack”. Not wanting to be a “jive turkey”, Jesse gives it a shot. Later in the film, we see that the drug dealer plays tennis and keeps his “wack” in a secret compartment in his tennis racket.

Pretty much instantly, Jesse is seeing snakes instead of plumbing pipes, little alligators instead of hairbrushes, rats in the oranges at the grocery store, and screaming at everyone, claiming they are against him. It even costs him his hard-fought record deal, and thus, his millions of dollars.

After his epic grocery-store freakout (definitely a movie highlight), Jesse meets an untimely demise. But his wife was pregnant, and five years after Jesse’s death, His wife and Jesse Jr. visit his grave. Jesse Jr. looks across the street and sees his dad’s drug dealer, still wheeling and dealing, while his daddy is six feet under. Will this travesty of justice cause Jesse Jr. to take up a life of wack-taking, or will he eventually walk the straight and narrow?


Death Drug is simply a hodgepodge of out-of-place scenes, plot inaccuracies, inconsistencies, holes, and even film stocks. That’s why it’s so awesome! I think the filmmakers must have been taking some “wack” in the editing room because patchwork quilts have more uniformity than Death Drug. 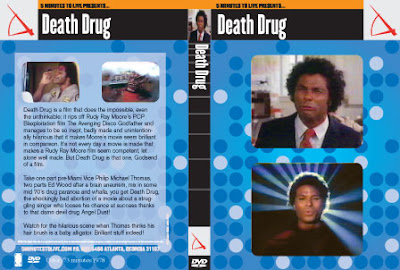 Even with Philip Michael Thomas’s seemingly-improvised intro and outro to the movie, and stopping the proceedings midway through for the ENTIRE music video of “Just the Way I Planned It”, which is hysterical in its own right, what with its lasers and superimposing PMT’s head on a pregnant woman’s stomach and all (although it is puzzling whether the song is by PMT, as it appears on his album “Living the Book of My Life”, or is it by Jesse from the movie, as we are led to believe? The VHS box art touts that it includes the video for the song…it doesn’t say that it’s in the MIDDLE of the movie, or who it’s supposed to be by).


In the movie, this video is preceded by two things: One, a newscast proclaiming “Local Man Makes Record.” (When talking about the local man, in the box next to the newscaster, they use a freeze frame from later in the movie. How did they get that?) Surely this is an uncommon newsbreak in Los Angeles. Secondly, it is stated that Jesse’s record company is trying an all new, revolutionary idea called “music clips”. Seeing as most of Death Drug preceded MTV, this was pretty ahead of its time.

The last quarter of the movie is a shot of a TV showing a very weird newscast. The anchorman looks like Don Cornelius and he is standing in front of a curtain. He interviews some white woman we haven’t seen before, she talks about how Jesse made many albums and won a couple Grammys. As we saw earlier in the movie, Jesse never had a chance to make his first album, because he was fired for taking too much “wack” and he thought the Gap Band was making weird faces at him.

Honestly, we can spend a lot of time talking about the padding and plotholes, but that is missing the point. Death Drug is a funny and one of a kind experience that everyone should see.

Don’t get high on “wack” but do watch this movie tonight!

How did they get the Gap Band to do this? Weren't they still kind of big in 78?

Yes, it was quite the coup!

This is easily my favorite review to date of your's. :)

How could I have missed this?

Appreciate the nice words. Sometimes gems like this fall through the cracks. Thanks for digging the 'Drug! :-)