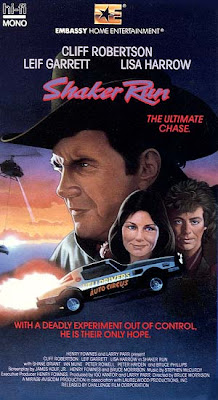 Seemingly the only reason for the movie Shaker Run to exist, is to prove now, beyond any doubt, the old adage: "real men wear pink."

Judd Pierson (Robertson) is a down-on-his-luck stunt driver for the "Helldrivers Auto Circus". He's getting older, and he can't quite jump that long row of cars like he used to. The audiences are dwindling but luckily Pierson has a young and enthusiastic sidekick named Casey (Garrett). Being a passenger in speeding cars makes Casey ill, which really complicates the events about to transpire...

When scientist Dr. Christine Rubin (Harrow) approaches them to take "the box" (which is a lethal virus) from one side of New Zealand to the other, The Helldriver boys reluctantly accept. The only problem is, an endless supply of Australian baddies are hot on their trail and constantly trying to kill them. The leader of the cabal of goons is Paul Thoreau (Briant of Moving Targets fame) who is in a helicopter for most of the movie.

Can the Helldrivers and Dr. Rubin get "the box" to its destination before it is snatched away by Thoreau? 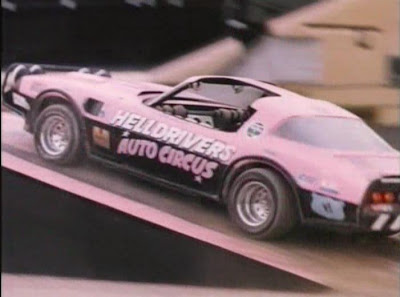 Shaker Run is an undiscovered gem of a road movie. There are some impressive car chases and stunts. Just imagine a cross between Vanishing Point (1971), Smokey & The Bandit (1977), and The Andromeda Strain (1971). While the title: "Shaker Run" might not be fully explained, I suppose "Vanishing Smokey Strain" doesn't have a good ring to it. Or maybe it does. Robertson portrays the grizzled old driver who's "The Best" with aplomb. He also has cool hat. It is not quite 10 gallon, more like 3-4 gallons. But it suits him perfectly.

Another good thing about 'Run is was made before political correctness and the "Budweiser" logo appears on cars and a simple chase that lasts for most of the movie is all you needed to get by.

One of the highlights is when our heroes are trapped on a boat. If you ever wanted to see Leif Garrett bash through a wall, here is your chance. Lastly, in a show of consideration, one of the credits at the end of the movie asks that you "please drive home safely."