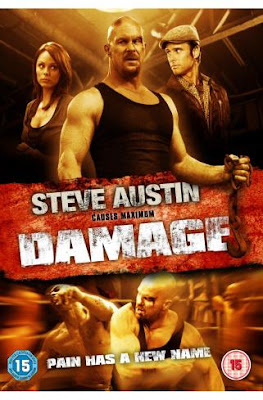 
Not to be confused with the Jeremy Irons movie of the same name, this "Damage" is full of hard-hitting fights. (It would be cool to see Irons in a punchfighting movie though. A man can dream...)

John Brickner (Austin) was in jail for manslaughter for 5 years and has now just been paroled and looking for work. He finds it by becoming a bouncer for a dive bar. Reno (Goggins) is a hustler who watches Brickner and invites him to fight in a underground tournament. At first Brickner says no way, but a phone call from the victim's wife asking for $250,000, forces him to fight. 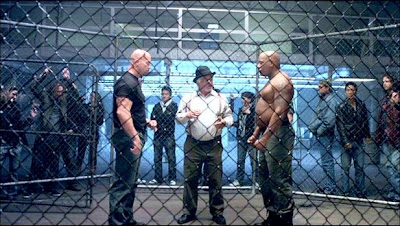 Can he fight his way to the top?

Steve Austin does a pretty decent job as Brickner. You care about his character...but this is a punch-fighting flick and we don't want to see maudlin acting. The movie forgets what it is.

One of the plot points is that Brickner has 13-inch fists. (Remember John Matuszak's 55-inch chest from One Man Force?) When Brickner punches once, it breaks an opponent's ribcage. The most exciting moments are the fight sequences...

...and they deliver in spades. They are brutal and bloody. I'm happy they are still making movies like this. 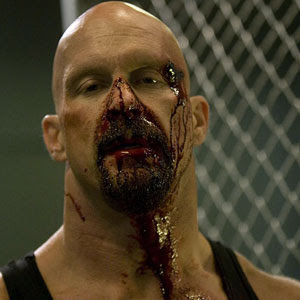 I'd even go as far as to say this is my favorite Stone Cold flick, although 'The Condemned' comes pretty close. As you said, this punch-fighting is so fun!

I agree with you. Also The Condemned was a blast! gotta love Vinnie Jones and Stone Cold (who was bad-ass in The Expendables)

For prime action rudeness you can't look past Austin's 2011 romp 'Tatctical Force.' I watched this film in disbelief. Austin stars as the maverick leader of a renegade SWAT team unit who use unconventional methods to take out their enemies. This incurs the wrath of the local police chief who berates them for their wanton destruction and senseless killings. It gets even better following this and the spirit of low budget 80's action still lives on! When you have a film with Keith Jardine as one of the major players that's cause for more praise. Stone Cold is surely the modern day Brian Bosworth.

Will definitely check that one out! Sounds like fun.