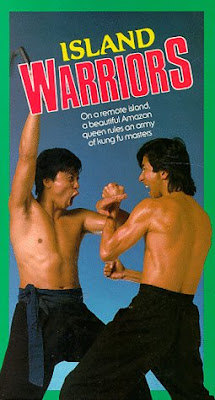 AKA: Warrior Women, The Country Of Beauties

Island Warriors, is a weird movie, but sadly but not enough to sustain interest throughout the entirety of its running time.

On the downside, it is basically, at its core, one of those generically “chop-socky” films with loud, ear-piercing dubbing, degrading film stock, and blaring, repetitive music. If this was the original Chinese release, it might be a different experience.

On the upside, it has some unique touches. For examples, read on.

As you might imagine, the action takes place on an island. It is a magical land populated only by women. They pass the time doing musical numbers, gymnastics, and a human jump rope. (Which is two people swinging a person around while another person jumps over them.) All the women live inside, you guessed it, a giant female statue, that shoots cannons out of its eyes.

The balance of life is disrupted when three pirates arrive on the island. After the initial shock, it is determined by the queen that they should wear chastity belts. When one of the pirates removes his, he is castrated and becomes a flaming gay stereotype. After some more hilarity, the men realize that male babies are cast into the ocean and when they see a baby boy in a bucket, they rescue it and that brings them into conflict with the “island warriors”.

The movie is surreal at times, as evidenced by how the island uses “pull-string” technology, where everything they want they get by pulling strings and there are some crazy, off-the-wall special effects and lights at the climax of the film.

Interestingly, the box art for the “Best Film and Video Co.” VHS (the version reviewed here) features a generic photo of two men locked in kung-fu combat (See picture on the top of the page.) This has nothing to do with the film at hand and must have been taken by the company that released it. This is especially odd because the idea about an island of women has good potential for cool artwork. They do wear some great outfits in the film.

Die-hard martial arts fans might want to check it out, but for others, it might be a bit too ridiculous, as the so-called “comic relief” gets grating at times.

Don’t be afraid to get stranded on this “Island” tonight!