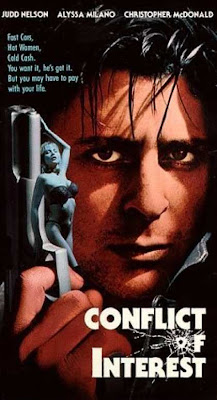 
“Fast Cars, Hot Women, Cold Cash. You want it, he's got it. But you may have to pay with your life…”

Conflict of Interest is an overlooked and somewhat underappreciated part of the post-80’s Judd Nelson catalogue. If you’ve seen every so-called “Brat Pack” movie ever made and are still hungry for more, this should fit the bill. Although while in 'Conflict, Nelson is definitely a brat, by this point in history the “pack” had dissipated.

Christopher McDonald is great as Mickey Flannery, a Cop On The Edge (or COTE) who gets suspended from the force for shooting his wife’s murderer in an act of revenge. While the audience is applauding his actions, the LAPD doesn’t share his zeal, and he becomes a longshoreman who gets wise to an illegal car-smuggling ring. When he’s not out on the docks, Mickey spends his time drinking and communicating with truckers and nerds with his unnecessarily elaborate ham radio setup. 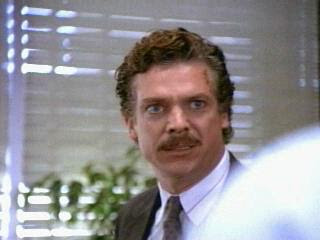 After this period of exile, it looks like everything is coming up roses for Mickey. He gets his old job back, he shares a house with his girlfriend who cares about him, and his son Jason returns after seven years living with his grandparents. But the arrival of Jason, rather than being a joyous family reunion, opens up a maelstrom of pain and problems for all concerned, especially Mickey.

Jason is not the cute little kid Mickey remembers from when he last saw him. It turns out he is a motorcycle-riding, leather jacket-wearing badass with a monstrous mullet of epic proportions. His mullet represents the hurt, resentment and abandonment issues he feels towards his father. But Jason’s not all bad, and secretly wants to be a good son. And Flannery sees his return as a great opportunity to be a family again.

But Gideon (Nelson) enters the picture and, being the diabolical antagonist that he is, exploits these family weaknesses to the utmost, for his own evil ends. You see, Gideon is the local criminal who has his hands in every illegal activity in town, and he covers it all up in his role as owner of the, and I quote , "deffest metal club in town", called The Wreck. Motorcycles hang from the ceiling. No wonder this place is so popular. Plus you know he’s evil because he wears guy-liner, a lot of jewelry, has crazy sideburns and wears frilly pirate shirts that are so gay-looking, it makes “The Puffy Shirt” of Seinfeld fame seem positively tame by comparison. He’s meant to be the decadent-dilettante-disturbingly intelligent-bad dude we all fear in our nightmares.

Noting Jason’s interest in sound engineering (a trait that must be in the DNA, remember dad’s ham radios), Gideon offers Jason a job running sound at The Wreck, a job Jason enthusiastically accepts. While Jason, blissfully ignorant, is crankin’ the tunes by D.I. and Gary Numan, (“Metal Club” presumably referring to the fact that people wear outrageous metallic clothing), girls around town start being found dead. Flannery is assigned to the case and soon realizes Gideon is just using Jason as a patsy. After several tense confrontations, it seems Gideon and Mickey are in a good-and-evil battle for Jason’s soul.

Gideon continually mocks Flannery‘s parenting abilities and insinuates he is the better father figure for Jason.

This enrages Mickey, now literally fighting for his son’s love. Flannery wants to go all out, but remembers where that has gotten him in the past. So he is fighting his inner demons as well. But in the course of his investigations, he discovers a shocking conspiracy that goes all the way to the top. (Where else did you think it would go?)

As usual, there is an angry black Captain (AKA a BYC or Black Yelling Chief) who yells at Flannery and demands Mickey to give him his badge and gun.

One of the aspects of “Interest” is the use of crazy slang. Jason insults his rivals by calling them “Barneys" and when he is really mad calling them a “supper buddy”(? ) and Jason spouts haiku whenever the mood strikes him. One of the strangest and funniest uses of slang is when Gideon’s goon named “Thrasher” insults Flannery by calling him “Jerk Beef” (???) This insult is clearly the catalyst in Mickey’s quest for justice.

'Conflict has everything you want in a movie: Crazy slang, explosions, and Judd Nelson.
There’s no “Conflict” in taking an “Interest” in this tonight!