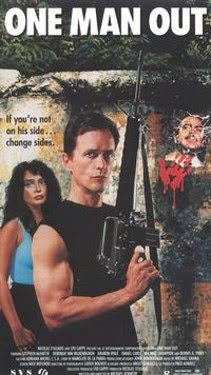 “If you’re not on his side….CHANGE SIDES.”

One Man Out is a run-of-the-mill straight to video actioner with no surprises.

Erik (McHattie) is working for the government of a small South American country, the movie never says which one. The government is paying this gringo to shoot the rebels. When he develops a relationship with a reporter, and the government wants him to dispose of the friendly local printer, Erik refuses and gets in a whole heap of trouble.

To add insult to injury, a guy who looks like a cross between Ed Begley Jr. and Drew Carey has involved him in a deadly drug deal that goes all the way to the top of the corrupt regime. Can Erik get out of this jam alive? Also what is the significance of the painted handprints? You may or may not want to find out.

Some of Erik’s favorite activities include taking an “edge of your seat bath” which seems to entail lying on your back in the bathtub with your eyes bugged out and sitting up abruptly. It is an “X-treme” way to get clean. Practically a subplot, Erik lies on his back a lot in the movie. He stares at the ceiling for hours at a time.

One of the advantages of living in a third-world hellhole is displayed when Erik tells some 6 year old kid to “get me a beer.” When Erik is preparing to go one of his shooting missions (which there should have been more of in the film), he makes sure to put on football quality eyeblack under his eyes. Never mind he is the only white man in the entire country with bright blond spiky hair (on the box cover it is jet black for some reason). No one will ever see him coming.

It is so hot in this country that pants are a major hindrance. There are many male pantsless characters throughout the film. Speaking of torture, we think the filmmakers were trying to make a serious statement about the use of torture around the world. There is even an onscreen message at the beginning of the film talking about it. Firstly, in the movie all the baddies do is dunk people in a tub which people pay for at any carnival. It looks like they are bobbing for apples. Secondly, anyone watching this boring tripe isn’t interested in hearing about human rights abuses. They want to drink a couple brewskies and hang with their buds.

Stephen McHattie really, really, really looks like Peter Weller. Thank goodness for McHattie, if Peter Weller is busy, McHattie is there to pick up the slack. That being said, McHattie does put in a serious performance, which is the only highlight in this dud. The director, Michael Kennedy also helmed The Heist (aka: “Hostile Force”) with Andrew McCarthy.

One Man Out (which is not about baseball) brings nothing new to the table. It doesn’t offer anything different for the action movie viewer.

Opt “Out” of this classic tonight!