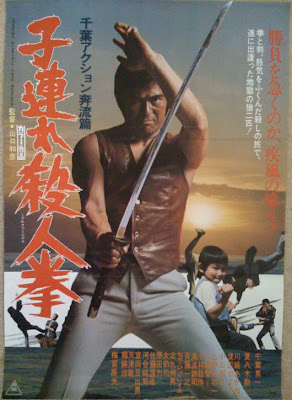 
"The Deadliest Dragon That Ever Smashed the Street Gangs!"

Karate Warriors is a somewhat confusing but enjoyable final entry in the "Street Fighter" series we all know and love.

The story this time around involves Chico (Chiba) a mysterious man who arrives in a town run by two warring gangs. Chico has to make sure they keep warring because he wants to get the heroin stash and keep the gangs off his back. Meanwhile he develops a friendship with a young boy. Added into this mix is a crazy man who dresses in traditional samurai garb and is chopping people up with a samurai sword. Will Chico use his awesome beat-em-up skills to win the day?

The VHS tape under consideration for this review is titled "Karate Warrior". While the on-screen title reads: Karate Warriors. The Karate Warrior print has poor dubbing and it is Pan & Scan. It is hard to tell who is talking on screen. The plot is hard enough to decipher as it is, without having to figure who is talking - Kelso? Or Heega? While the gangs are confused and wondering if Chico is a "Karate Fighter?", Chico has already made his way through some impressive fights. For example, in a brawl with a man that appears to be a lumberjack, he rips Chico's sleeve and it is clobberin' time! 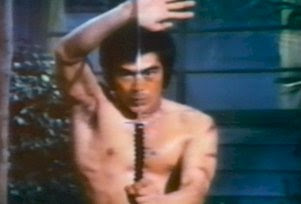 These technical flaws are almost forgotten about because the fights are so cool and fun to watch. The fights are slowed down and sped up for maximum impact. Chiba takes no prisoners and it looks like the kicking and punching is full contact. The fights are brutal in true "Street Fighter" tradition and the tempo changes are almost musical.

The final battle takes place on a beach and we wonder if Chico is going to find the key to the hidden heroin stash. But before he can get there, there is an all-out melee. Impressively, it is a sword and karate fight at the same time!

Chiba does display a sensitive side with the young tot. Insanity is reached with the the crazy Samurai guy in modern day 70's Japan.

Karate Warrior is a tough, no-nonsense fight to the finish!