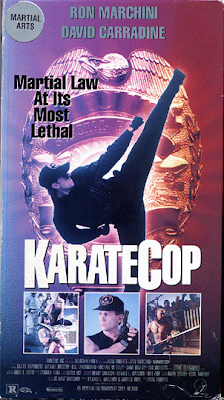 
"Martial Law At Its Most Lethal!"

Karate Cop is the creme de la creme of crud. It is so incredibly bad, it is hard to fathom. You gotta love it! (or do you?)

This is a sequel to the previous year's Omega Cop (1990) also featuring Marchini as John Travis, the last cop on earth. There must have been a public outcry for more "Marchini Madness". Thankfully he answered the call.

When this installment begins, some baddies are chasing two women. Right when they are closing in, John Travis appears and says a classic introductory line: (Read in the most flat monotonous tone you can) "Can I help you guys?" You hear people at fast food joints deliver that line with more passion and conviction.

It appears Travis is the last cop in a post-apocalyptic world. You can tell because his homemade (?) hat proudly announces he is "Special Police". Special indeed. He's hiding out in an abandoned warehouse of course. He's there with a woman named Rachel and a gaggle of children. In the future innocent tots are called "Freebies" and the baddies are called "Scavs" (not to be confused with Neon City (1991) where the baddies are called "Skins".) The head of the Scavs is a portly man named Lincoln (Landingham) who resembles a sillier version of Accept's Udo Dirkschneider, and his right-hand man is named "Snaker" who has a very irritating and loud voice. It already grates on your nerves the moment you hear him. Just imagine "Jar-Jar Binks" yelling into 5 megaphones. 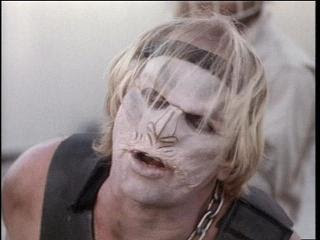 In order to save the Freebies, Travis must find a magic crystal that powers a Star Trek-like teleporting device. The plan is to teleport them to Oregon because apparently the apocalypse hasn't yet reached Oregon. Before that can happen, Travis has to battle through "Trade Town" and fight the Scavs. We don't know how far "Trade Town" is from Oregon. But it must be pretty far. Luckily, "If anyone can make it, it's John Travis!" Along his magical journey, he has to defuse a bomb that doesn't go off and stops at a roadside diner run by "Dad" played by David Carradine. The only thing they serve there is something called "Jacky Rabbit Stew". "Dad" gives Travis a big bowl of it, and he refuses to choke it down, and a fight ensues. 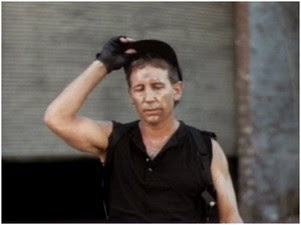 Meanwhile, Rachel is kidnapped and held captive by Lincoln. Lincoln passes the time watching cage fighting matches. Whoever wins the cage fight gets Rachel as the prize. Travis has to rescue her from the clutches of the biggest meanest scav in town who wins all the cage fighting matches. Unfortunately Lincoln's compound is guarded by guys in used sporting equipment with spray-painted football helmets. Travis invades the compound and more fights ensue. Will Travis put the crystal in the teleporter in order to ship the freebies to Oregon, or will Lincoln win out?

One of the most annoying aspects about the movie is that Travis is very unlikable. He whines and complains about every single task he has to do, most of which ends with the phrase "she said". For example, "It will be easy she said, diffuse the bomb she said" etc. Thusly the audience never gets behind him as a hero we can believe in. He comes off as a jerk. Also, he seems a bit old to be capering around in "Trade Town". He looks like he is in his fifties. His "Special Police" cap is probably there to hide his balding head. Maybe that explains all the complaining. His acting makes Chuck Norris look like a master thespian. His delivery is more wooden than a lumber yard. It must be hard to make a futuristic sci-fi epic with no budget. They spent it all on Carradine and the hat. His best moment is when he jumps off a building and goes "AAAAhhh!!!!!" 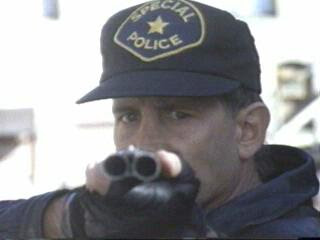 After all this ridiculousness, the end credits feature an R&B slow jam extolling the virtues of The Karate Cop.

Ron Marchini is a national treasure and so is this VHS tape. Find it today!