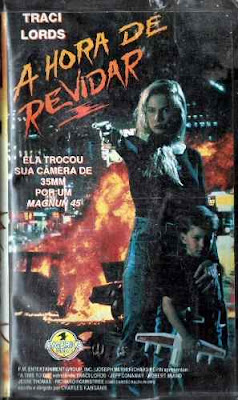 
In terms of pure entertainment value, A Time To Die is on par with the same year’s Raw Nerve (1991) also with Traci Lords (See review). 'Die has the edge as far as production value goes. 1991 was a banner year for Traci Lords as these AIP and PM Entertainment productions prove. She also released Shock 'Em Dead (1991) and appeared in some television productions like Super Force. Her album “1000 Fires” wasn’t far behind.

Jeff Conaway plays Frank, an L.A. cop who wears a kickin’ sports jacket and has slick hair. One night he breaks up an illegal gun deal and when he gets in over his head, he is almost shot and killed by Hispanic gangsters. Luckily, Jackie Swanson (Lords) arrives on the scene just in time and helps him thwart the bad guys. You see, Jackie is doing her 400 hours of community service by taking pictures for the L.A.P.D. She answers to disgruntled Captain Ralph Phipps (Roundtree).

She incurred this penalty because of a bogus drug charge lodged by corrupt cop Eddie Martin (Ralph Nader lookalike Robert Miano). She’s a divorced gal and she has a young son with her ex-husband. If she ever wants to see her son again, she has to complete her “debt to society”. 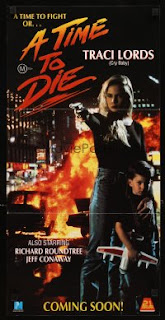 Meanwhile Frank attempts to woo Jackie into a relationship come with mixed results. His pushy nature eventually wins her over for a short period of time. Maybe Frank isn’t really the charming cad he thinks he is.

The plot kicks into high gear when Jackie witnesses Eddie killing a pimp and she snaps some pics. Eddie gets wise, and they have a meeting. Jackie wants to use the pics as a bargaining chip to expunge her record so she can see her son. Eddie says “No Dice” and the more conflict ensues, including a gratuitous but enjoyable car blow-up. Will Jackie succeed in seeing her son or will an unexpected twist ruin it all?

One of the highlights of the film is Jackie’s son Kevin (Thomas). He is somewhere between 5 and 8 years old and yet he is a very snappy dresser. He wears a jacket, a tie and cowboy boots at all times, he looks very spiffy. Strangely there is a part of the movie that intercuts a sex scene with Kevin making his own breakfast(!) This might be a movie first. He fills a glass with half chocolate syrup and half milk. Meanwhile, he is assembling a messy disaster of waffles or possibly pancakes. Later on in the film, Kevin is depressed about the divorce and is glumly playing with his action figures….getting the line of the movie, Kevin blurts out: “I’m gonna smoosh you!” The actor that plays Kevin has a lot of range and he is a national treasure.

Fan Favorite Richard Roundtree has the thankless role as BYC (Black Yelling Chief), but he makes it work. He is forever putting up with the guff of Jackie, Frank and his fellow officers.

In a bizarre subplot, two angry lesbians continually get arrested for fighting with plastic swords. Frank even takes Jackie to their house to observe this spectacle for a date! On that same date, Frank and Jackie have a picnic in the park and then they visit the lesbians fighting and to “cap” it off they go to the gun range. How could Jackie keep spurning Frank’s advances after that?

Overall, there is nothing wrong with A Time To Die. It has a lovable cast of B-movie favorites and some decently staged action. The plot is pretty silly and melodramatic, but who really cares. Kevin really lifts this up from the muck and the mire.

Set aside some “Time” to watch this classic tonight!