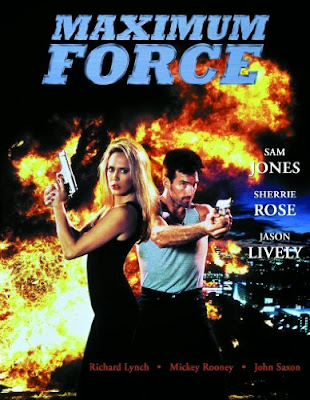 
Maximum Force is an enjoyable 90s direct to video blow 'em up from PM entertainment.

Max Tanabe (as portrayed by the non-Japanese Lynch) is an unscrupulous crime lord who operates out of a high rise office building in downtown L.A. He claims it is like a fortress and he never leaves the boardroom. This is unfortunate for his multiracial gang of baddies who have to suffer through all night meetings.

Captain Fuller (Saxon) has been trying to catch Tanabe for years but he is too evil to get caught. Fuller is close to retirement and wants to end his career with a bang by nabbing Tanabe. Towards this end he assembles a crack team of three cops who each dispense their own brand of justice.

Crews (Sam J. Jones) is the unshaven, unwashed, cigarette smoking, leather jacket wearing badass who spends his days trying to break up an underground (is there any other kind...) kick\punch\shootfighting ring.

Randal (Sherrie Rose) is a tough-talkin' dame who goes undercover as a prostitute and has no problem kicking, shooting and punching with the best of them.

Carver (Jason Lively) is the techie nerd and is a sassy jokester that provides the comic relief, such as it is.

Separately they all have their own cases....but once they are assembled by Fuller, they become a Maximum Force to be reckoned with!

They are holed up in an underlit studio apartment/hideout where they work on becoming "One mind body and soul". They are many scenes developing their camaraderie, including many training sequences. The standout being the one with Crews smoking a cigarette while jumping rope. Naturally, there is a romantic triangle between the cops. Crews wins out because the other guy's pickup line involves shooting him in the chest while he tries out an experimental bulletproof vest. Also he is a nerd. The final phase of their training involves a surprise ninja attack. They pass with flying colors. Tanabe better watch his back...

Mickey Rooney is in this crud as the corrupt chief of police who is on the take from Tanabe. He wants Fuller to stop pursuing him. Rooney never leaves his limo.

The final confrontation between Tanabe's minions and the Maxiumum Forcers involves many of the minions (who you know are bad because they all have rat tails and mullets.) being blown to kingdom come on Carver's explosive remote control cars. In the last minutes of the movie they introduce a great new character: BEAR (Asbjorn "Bear" Riis)! A hulking superdude who picks people up and throws them. Crews randomly states "this is my friend....BEAR!" and he briefly becomes part of the team. Somehow BEAR ends up in a science lab. Because brawn not brains are BEAR's specialty he looks confused and says "HUH?" in true Charles Barkley fashion. Sadly, mere seconds after meeting him, he passes away. This was a sad moment for us all.

A moment of silence please...


This is an entertaining actioner but it needed more BEAR!

I agree totally. This was fun PM Entertainment, with a great cast and great explosions. My favorite was how they got the helicopter explosion out of the way in the first five minutes; and I too was disappointed with Bear's end. Too soon, too soon.

So happy you enjoyed the Bear (R.I.P.) character. He should've got his own PM movie!