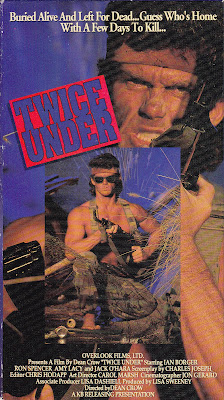 
Twice Under is among the worst "movies" we've ever seen.

Twice Under is the saga of Rick Chambers (Borger), a teen who loves blasting his rockin' tunes by any means necessary. Even his room is filled with at least 14 ghetto blasters. While he jams to his tunes, he likes to be shirtless and throw darts at his bitchin' dartboard. Rick happens to be the son of a Vietnam vet and is half-Vietnamese himself. His dad, Ed (O'Hara) fought in the tunnels of 'Nam and now works underground in the sewer system near his home. Ed's only decor in his office is a lone sombrero.

All of Ed's platoon carried a skull of a rat on their dog tags, which they called the "rat jaw". There have been some murders around town where a rat jaw has been left at the scene. Maybe "Dagget" (Spencer) isn't dead like previously thought. After all, he does have a Viewmaster taped to his face and he can "see in the dark". He does keep calling Ed's house and bothering him. When Ed along with Rick's girlfriend Cammy (Lacy) go missing, it's up to the Rickster himself to save the day. 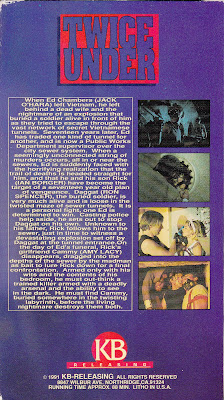 When we first meet Rick, he and Cammy are sitting in her car and doing some wicked air drums without the aid of Hit Stix or Hit Stix II. The scene goes on far, far too long, practically the whole song. He even air drums while walking to his house from the car, while making a sandwich (which consists of several piles of baloney and cheese...no bread), and into his room where he air drums some more. Rick is possibly the most radically awesome dude ever. He has not one, but two popped collars. He is the type who would slam a 'Dew while snowboarding out of a helicopter.

Rick is also a whiny and ineffectual "hero". When he's not lounging around, giving the audience some gratuitous underwear shots, he's screaming "Nooooooooo!!!" at the top of his lungs when he thinks his dad is dead. We know as an audience that he went to a funeral because he has a little flag that says "FUNERAL" on his car, which he sadly removes, and he is too morose to rock out to his jams. But when push comes to shove, he puts on his suspenders and his belt and attempts to rescue Cammy from the way-too-extended kidnap scene. He does it the only way he knows how: By carrying ALL his ghetto blasters in one bag along with his entire dart set. 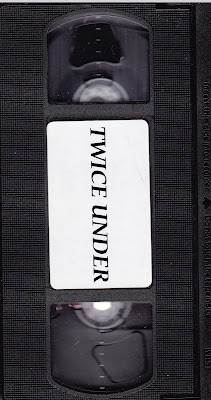 Eventually there is a groan-inducing "swordfight" between Rick and Dagget where they both wield manhole cover openers.

For most of the cast and crew, this is their first and only production to date. Everything about the movie is amateurish. The running time claims to be 90 minutes, but it feels like days because of the extreme pacing issues. The rockin' soundtrack is by far the best part of the movie, yet the credits never reveal who the artists are.

I rather enjoyed this one, the climax was pretty cool and i'll admit I did not see the "Death by car" bit coming.

Happy you enjoyed it! Impressed you were able to find it.

Yeah I had to pay a pretty penny on Amazon to get it, I sent it to someone else to rip it onto a DVD-R and i'll see about uploading it onto Internet Archive to preserve it.