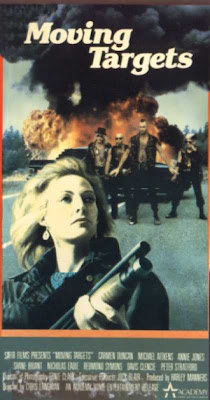 An Irish assassin named Riley (Aitkens) shows up at an upscale house in Sydney, Australia where a woman he knows from his past, named Chrissie, lives with her daughter, Eve. He is wise to the fact that she has a large sum of money which was stolen from a bank in West Germany seventeen years earlier. She refuses to give him any of the money, and ignores his offer to protect her from some baddies which are coming to get the money.

After the appearance of Riley in her life, she withdraws the money from the bank, buys her friend’s car, buys a shotgun, saws it off, grabs her daughter and goes on the run, with Riley in hot pursuit. But now some new antagonists enter the scene. They are after Riley. So the mother-and-daughter team must now evade not only Riley, but the guys that are after him. I guess it sounds pretty complex, but it’s not really.

One of the more interesting scenes in the movie is one the first appearances of the character “Toe”. He is a member of a gang of leather-jacket wearing, beer-swilling, chicken-eating punks. When Chrissie and Eve are driving down a long stretch of highway, the hoodlums throw their chicken bones at them and a confrontation ensues. It is almost “Mad Max”-esque. In fact, Toe is one the stand-outs of the film and brought some much needed energy and interest. He wears a full-body necklace as part of his sleepwear.

Another highlight is when Chrissie drives through a supermarket during a chase. The fact that Chrissie said she was “brainwashed by 60s radicals” adds another layer of intrigue. When a local boy drives in front of Eve on his motorbike, pops a wheelie, and falls off, so begins their romantic subplot.

Moving Targets is essentially a road movie and one of its major attributes is that it is well-shot and shows the beauty of Australia very well. On the downside, it is slow at times. The real crime here is that this would be a great undiscovered gem, if it was just shorter, peppier, and snappier. The appearance of Toe alone can’t help the movie’s snail pace. On a positive note, it does end on a freeze-frame and that is always welcome.

“Shut your Gob” and consider watching this today.