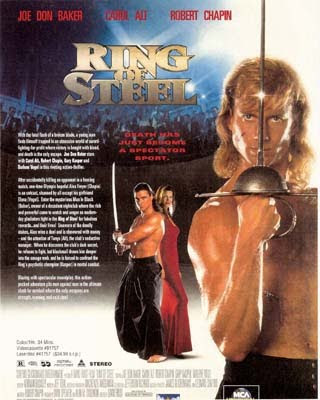 
Allez: Ring Of Steel is classier-than-average direct to video fare. Just imagine the structure of a classic punchfighting movie (see: pretty much everything we’ve written) but instead of punchfighting, it is sword-fighting. Well, to be perfectly accurate, it's more like “fence-fighting”.

Alex Freyer (Chapin) is on top of the world: He’s a champion fencer on his way to Olympic gold, and he keeps his many fencing trophies right on his coffee table in the living room. He just met his new girlfriend at a fencing tourney, and his mullet is lookin’ awesome in the cool breeze. His dreams are shattered when his bouton breaks and his riposte goes horribly, horribly wrong, and he accidentally stabs his opponent in the eye, killing him.

Alex is depressed and contemplates throwing out his fencing outfit for good. One day Alex is walking down a dark alley at night (bad idea) and is about to be mugged by some local street toughs. For some reason, Joe Don Baker shows up in his limo and announces “I’ve been following you.” Why Joe Don didn’t show up at Alex’s house is unknown. He invites Freyer and his girlfriend Elena (Vogel) to his underground fence-fighting club. Like Alex’s mullet, it is a business in the front and an illegal fence-fighting party in the back. 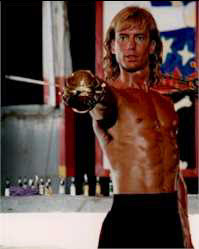 In true Lone Tiger (1999) tradition, the big boss man says the hero is “The Best” and then proceeds to groom him to be "The Best”. Isn’t he already "The Best"? After Alex does a few exhibition matches, Elena balks and doesn’t want him to fight anymore. Naturally the bad guys kidnap her and force Alex to participate in an arbitrary number of matches before they release her.

Can he thrust and parry his way to freedom?

The main fencing baddie is a meathead who wears a “shirtless shirt” and who has wide array of not “Cosby Sweaters” but “Cosby Vests”. Baker plays “The Man In Black”. That’s his name in the movie. Baker is a kinder, gentler sort of baddie and black is quite slimming. His bodyguard looks like a cross between Allen Kalter and Robert Loggia and he makes funny faces. 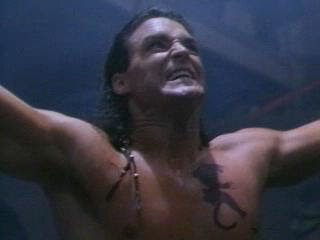 Other notable characters include an overweight LARP’er who dreams of being a barbarian (imagine a live-action version of “Comic Book Guy” from The Simpsons). He stumbles into the wrong salle, and he unfortunately gets slain in real life. Alex makes a friend in the theatrical fencer Brian (Jim Pirri). When Shirtless Shirt kills him, Alex grieves the only way he can: fencing practice.

In all comes to a head when cops get wise to the “Ring Of Steel”. The final confrontation is basically in the same steam factory from Cobra (1986).

This is Chapin’s first role and he is more a fencer than an actor. When his character is not pretending to be a pirate, he is doing fan favorite yell “Noooooooo!”

Shout “En Garde” while you are watching this movie tonight!