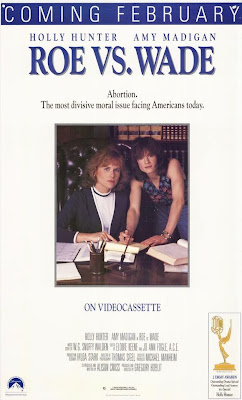 
Roe Vs. Wade could have been so much better. It's OK, but the script needed work. Holly Hunter plays Ellen. She gets pregnant and wants to have an abortion. There's a problem though: in Texas, abortion is illegal. Ellen is desperate and then she finds out about Sarah Weddington's (Madigan) plans to challenge the law. Terry O'Quinn is the other lawyer opposing her, but he has his own feelings.

Holly Hunter and Terry O'Quinn are excellent. Amy Madigan is stiff and Kathy Bates doesn't do anything. The script goes around in circles.

In the end: They had a great subject and lead actress, but the movie just didn't go the extra mile.