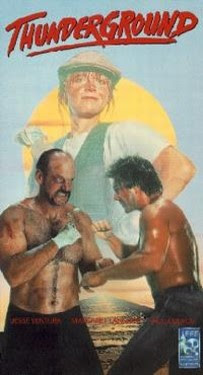 Thunderground is a very silly film. It's about a would-be boxer, Bird (Coufos) and a kid who want to fight the ultimate bad guy: "The Man" played by Jesse Ventura. The acting is pretty bad except Ventura who knows he's in a goofy film, and he overacts with glee.

I'm happy when movies like this see the light of day and not disappear off the face of the earth.

Thunderground is a mixture - a ridiculous mixture - of Rocky (1976), Over The Top (1987), and Bloodsport (1988). If you want to see hobos beat each other up and Jesse Ventura fighting in a remote forest, this is the movie for you. Also check out the semi-sequel to this movie Busted Up (1986) with Paul Coufos. He reprises his role as Bird.

Saw this one back in 2009. I expected it to be hilariously bad, but it actually ended up being okay.

I agree. Thunderground really wasn't that bad. I will fix the M. Emmett Walsh bit in the review. Thanks for the tip.