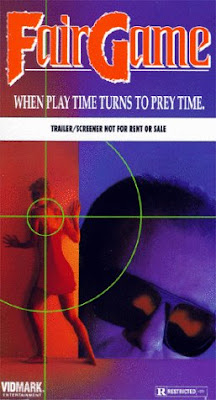 
Gene Campbell (Henry) buys a deadly black mamba snake and traps his former wife Eva (Styler) in her apartment with the snake. He sits outside in his car, monitoring both the snake and Eva on a computer tracking device. Will Eva escape?

Man, this is one weird movie. The plot, the camera angles (including, you guessed it, "snake vision"), lighting and the strange dialogue all add up to one off-kilter experience. Speaking of dialogue, Henry is great in his role as the deranged electronics whiz who, feeling jilted by his former wife, decides shooting and stabbing her are so old-fashioned and having her get bitten by a poisonous snake is the wave of the future. He gets to say totally natural lines that people say to each other every day, such as: "You're so weak. So sweet, shy and impressionable. It was me, wasn't it? I suffocated you with my strength. Took you over, I corrupted you with my money and my power. You had to ditch me to defend the delicate little flower of your weakness. You can't imagine how much I despise you - I despise weaklings" ...and it goes on from there. The best part is, Henry pulls it off! He is such a great actor, you totally believe him as the nutjob who hates weakness. Did I mention he hates weakness?

Of course, this begs the question, why did he hook up with quirky, artsy-type (She wears two different color socks) Eva in the first place? She must make a lot of money making play-doh sculptures of octopi to afford her gigantic, vast, windowless apartment. In fact, rather than just chop the snake's head off with a knife, she actually jogs laps around the place "to confuse it". She doesn't wear pants throughout most of the movie, even when putting on all her clothes to protect herself against the snake, the pants don't last very long. She also must talk to herself for about 90 percent of the running time. You'll wonder why Sting wanted to marry her.

It is established that Eva is an animal lover, so maybe it was out of pure diabolical evil that Gene wanted to use that against her and kill her with a snake. There is an animal theme throughout the movie, from Eva's shirt with a fish on it, to their names (Eva = Eve, i.e., Adam and Eve and the snake, and Gene = the genetic map of life), and her sculptures.

Also, music legend Giorgio Moroder not only did the music, but also co-produced the film. Clearly the man knows what to invest his money in.

Bizarrely directed by Mario Orfini, Fair Game is an oddity.