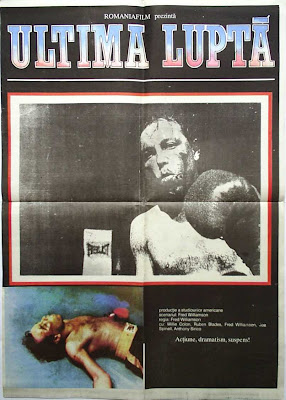 The Last Fight is an interesting and worthwhile boxing/gangster film written and directed by, and starring, fan-favorite Fred Williamson.

Andy "Kid Clave" Perez (Blades) is a good-natured boxer and singer, but unfortunately also a "bad gambler" that owes gangster Joaquin Vargas (Colon) a lot of money. Vargas offers a "deal" to take fifty percent of Andy's action in the fight game. Sadly, this affects Andy's beloved elderly manager, Papa (Carollo). When some of Vargas' overzealous goons start interfering with people in Andy's inner circle (trying to carefully sidestep spoilers here), Fred Williamson steps in, reprising his role (from 1976's Death Journey and No Way Back as Jesse Crowder, A private detective and ex-cop. Will Crowder get answers? Will Kid Clave get his title shot? Or will outside circumstances prevent him from achieving his dream?

One of the interesting things about  The Last Fight are the appearances by real people. While a fictional film and not a documentary, it features real-life boxers Jose "Chegui" Torres and Salvador Sanchez, and boxing people Bert Sugarman and Don Dunphy, not to mention...wait for it...DON KING! AS HIMSELF! ACTING! INVOLVED IN THE PLOT! IT'S CRAZY, MAN! Actually, it's not that crazy, but it's certainly not boring to watch. Real-life musical collaborators Blades and Colon are also front and center as the troubled boxer/singer and the hirsute gangster (when he wears sunglasses, you really cannot see his face), respectively. Also speaking of real-life aspects, the NYC locations, especially the Times Square of the early eighties provide some good grit that enliven the proceedings.

Besides Williamson, another one of my favorite actors is on hand, for one scene: the great Joe Spinell plays the gangster Colon answers to. The role isn't too dissimilar from the one he plays in that other boxing movie, Rocky (1976).

As far as criticisms go, I would have liked to have seen more Spinell, but maybe that's just me. Also there is a certain lack of originality, but that's okay because who really cares about that anyway? There are some stodgy acting moments, which is more than forgivable because not only is that common and par for the course with low budget/independent films, but a lot of people involved are non-actors. But there is also some bad "boxing-acting". By that I mean some pretty silly feigned punches and dodges. Weirdly, in the end credits, Darlanne Fluegel is simply "Darlanne". I don't know if whoever typed the credits was afraid of spelling her last name wrong, or trying to launch her like "Madonna" or "Cher", but her last name is missing.

Williamson steals the show as Crowder, giving himself pretty much all the best lines in the movie. It is always a joy to watch him. I wish I was as cool as Fred Williamson.