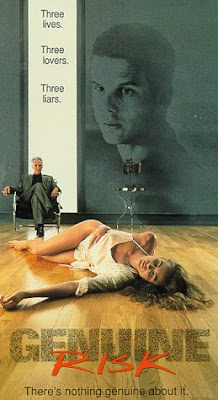 
Genuine Risk is what you might call a "neo-noir" film, predating Hard Eight (1996), among other examples, and quite similar to most of the output of director John Dahl. His The Last Seduction (1994) also features Peter Berg. Perhaps Dahl saw Genuine Risk and recognized Berg as a new noir figure, the 90's answer to Dan Duryea? We may never know.

Berg puts in an engaging performance as Henry, a good-looking but down-on-his-luck dude who is addicted to betting on horse races and lives in a squalid apartment above a seedy L.A. bar. His buddy Jack (M.K. Harris) is a psychopathic gangster who works for Paul Hellwart (Stamp), the biggest, baddest, most intimidating crime lord in town. Needing money, Henry reluctantly agrees to work with Jack and become an employee of Hellwart. Next thing you know, Henry is mixed up with The Girl (Johnson), Hellwart's girlfriend. Uh Oh.

As stated earlier, Berg is quite good in this film. He is likable amid his difficult circumstances. He doesn't want to be a bad guy. He provides a good audience-identification character, as he's sort of roped in bit by bit into a life of crime. Not to take anything away from him, but I noted that Christian Slater also could have played the part of Henry. That would have been interesting. Terence Stamp is scary as Hellwart (great name), and there is an intriguing point about his character, that he was a pop star in the 60's in England under the name Paul Blaze, that might have been developed a bit more. Also one gets the feeling that Stamp wasn't firing on all cylinders, but that's okay, as it fits the moody style of the film. Sid Haig makes a welcome appearance as one of Hellwart's men.

Besides the Paul Blaze thing (The film was produced by Miles Copeland and the IRS record label, maybe they demanded a musical subplot?), there are some other half-baked ideas in "Genuine Risk". For example, the entire character of "The Girl". Even her lack of a name connotes zero character development. She doesn't say that much or do that much, and her "personality" is nil. it seems hard to believe Berg would fall in LOVE with her. Sure, she's hot but she's basically a human prop. And a rich, powerful crime boss like Hellwart could get any woman he wants, why he would unleash hell over "The Girl" seems a waste.

But ultimately, these are minor quibbles, as Genuine Risk (the title has at least two meanings, you have to watch the film to see what they are) is well worth watching. The lighting and cinematography, as well as the music, capture that noir feeling well, and there are some good performances and ideas. Genuine Risk is an underrated gem.