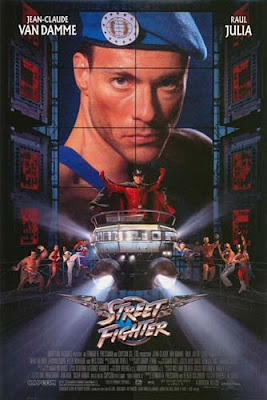 
We all love the Super Nintendo classic game "Street Fighter", but what was so annoying about it was that you had to press buttons and be interactive. And it didn't have Van Damme. Now you can sit back and relax and let the storyline take over!

The plot involves General M. Bison (Julia) who wants to take over the world using genetic supersoldiers such as his guinea pig Carlos Blanka, but stopping him in his quest for world domination is Colonel William F. Guile (Van Damme) and his team of "Street Fighters" which include all the classic characters you know and love from the game, such as Ken, Ryu, E. Honda, Balrog, Cammy and Chun Li. Some of the evil characters are Zangief, Sagat, Vega and Dee Jay. They obviously took some liberties with the good and bad characters from the game. Naturally, Dhalsim is a scientist (with no stretching power).

When Van Damme isn't wearing his blue beret, we see that his hair is red. Not only is this the only movie to date where he is a ginger, As we all remember, Guile in the game is blond. A Van Damme highlight is when he says "Bison...how many children are you going to orphan...I'm coming to get ya Bison!" and then flexes his muscles in strange meathead fashion. 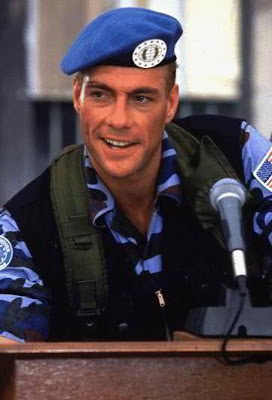 Raul Julia as Bison once again proves the old adage "Never have a last movie". See Raw Nerve (1991) for more information on this. After a speech about "stoicism" he then proceeds to chew the scenery to pieces. But what would you do in his situation? You have to feel somewhat bad for Julia, but he seems to be making the best of the situation before his tragic death. There is a point in the movie where we see an artists' rendering of Bison as a sad clown. Huh???!!?? Bison's suit has rocket boots and a CPR function. In other words it inflates in and out very funnily. His big line in the movie is "GAAAAAMMMMEEE OVVVEERRRR!!!!" You gotta love it...I think. 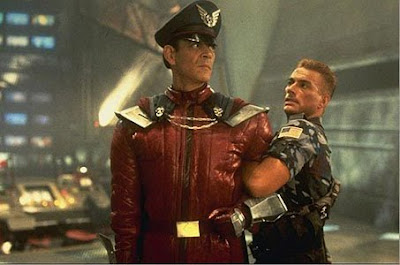 Street Fighter is tailor-made for dum-dums. Everything is spelled out for you. When gas floods Bison's HQ, Honda proclaims "It's gas!!!" When Chun Li jumps out of a window, Honda yells out "She's gone!!!!" Either Honda is a big moron, or he thinks the audience is. 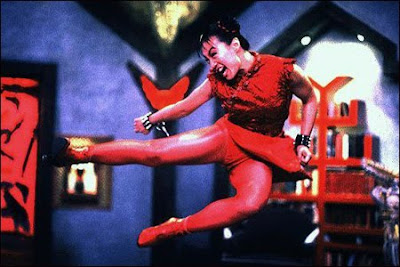 The budget must not have allowed for Dhalsim stretching, ha-do-kens and sonic booms. All the characters at least attempt to say their catch phrases. However, one of the most disappointing things about the movie is that E. Honda failed to do his classic move, the "thousand-hand slap". Why even make a Street Fighter movie if that's not in it?

The movie almost justifies its existence when at the end, all the heroes jump up in the air and shout "Yeah!" and there is a freeze-frame. Then the title comes up (sans the subtitle "The Ultimate Battle", inexplicably seen during the opening titles). This is a great fan-favorite technique.

After Mortal Kombat, Street Fighter is the second best video game movie of the 90's!

Comeuppance review by Ty and Brett
Posted by Ty at 29.6.10

Any word on the Tekken movie?

Supposed to be coming to local video shelves soon. The second it comes out we will review it!