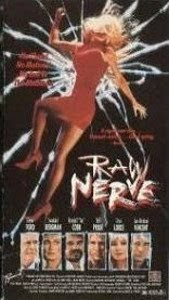 Directed By: David A. Prior

AIP is a company that produced a treasure trove of low budget direct-to-video films that specialized in action movies, as the company name implies. Being a low-budget production company, you would think they would have been familiar with their forebear "American International Pictures" the original AIP. Why they used that name is a bit puzzling. Even though they made other types of genre movies, it was with action that they hit their stride. Although they ceased production in 1994, they left behind a legacy of VHS gems such as: White Fury (1990) , Alien Seed (1989) (with Erik Estrada), and Shredder Orpheus (1990) (Maybe they weren't all gems)

Raw Nerve is another supremely silly entry in the AIP canon. It was trying to be a serious contender with other suspense thrillers cluttering video store shelves at the time. There are too many missteps in its execution, star power notwithstanding.

At the local county fair, a woman is murdered in the Hall Of Mirrors. Meanwhile, local yahoos Jimmy (Prior) and slovenly alcoholic Blake (Cobb) are gearing up for a car race….until Jimmy sees visions of the murder from the “Prior” evening. He sweats profusely and freaks out in an exaggerated manner. It jeopardizes his racing ability and he almost dies. The couple of yokels in the stands were hoping for a fiery death. Despite the fact this race is at 9am on a weekday, the stands are packed. In between breakfast beers, Blake doesn’t seem too concerned about his chum’s plight.

Jimmy lives with his sister, Gina (Lords) she is a pre-med student and the “good girl”. She goes to the prom and two strange looking preppies in their late 30’s (and yet still in high school) offer Gina and her friend “wacky tabaccy”. While Gina is thinking of giving in to peer pressure, another murder occurs. Now Jimmy is the prime suspect but no one believes him, especially the police. 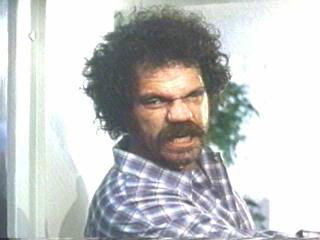 Down at the local precinct, Detective Ellis (Vincent) is assigned to the case. His is put in charge by Captain Gavin (Ford). In addition, Bergman plays Gloria, a reporter trying to get answers from Jimmy and in the process strikes up a relationship with him. Who can resist his sweaty freak-outs? Jimmy is naturally suspicious of Gloria. Also in the love triangle is Ellis who was previously married to her. If all this seems too confusing, it is not.

While out one night soused out of his mind, Blake finds a mysterious red high heel. What is the secret of the shoe? Ellis and Gavin pursue Jimmy around town for most of the movie, which leads into a final confrontation on the top level of a parking garage. Blake with beer in hand (as usual) guns his truck through a concrete divider to his doom below….but is that the end?....is there one final twist?

Sadly this was Ford’s final film appearance. This follows the old saying: “Never have a last movie.” Just look at Raul Julia (Street Fighter,1994), Orson Welles (Transformers: The Movie, 1986) and John Candy and Peter Sellers as well. Now we can add Glenn Ford to this illustrious list. Randall “Tex” Cobb is a triumph as Blake Garrett. He is unshaven, his clothes barely fit, and he stumbles around drunkenly the entire film. He adds a lot.


Ford steals the movie despite his minimal screen time: While reminiscing about his early days with Vincent and what lead him to becoming an policeman , he mentions to him that he almost became a florist. When Vincent asks him why, Ford responds with THE line of the movie: unexpectedly informs us: "I like flowers."

Your nerves will be raw when you watch this classic tonight!