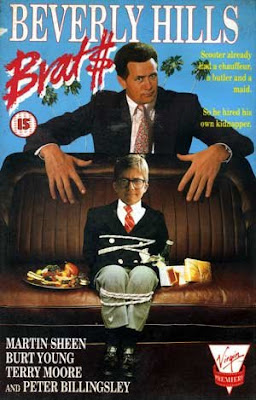 Starting with an inexplicable 2-second cameo by Whoopi Goldberg simply saying the title of the movie in a confused tone, and then blasting the title song, "Silver Spoons" by Harry and the Half-Pints (which is extremely catchy), "Beverly Hills Brats" is an under-appreciated 80's comedy. 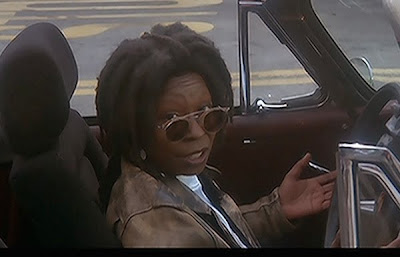 Montgomery "Scooter" Miller (Billingsley) feels neglected by his rich family, so to get them to notice him, he hires down-on-his-luck gambler/thief Clive Belknap (Young) to kidnap him, and he reluctantly agrees. At first, Clive and Scooter get along famously, but then Scooter's family cottons on to the whole scheme and they post a reward. Clive wants the reward but then he feels guilty because Scooter's family really does care about him, and that causes a rift between them. Then, of course, hilarity ensues.

See the above UK poster for the creepiest and most inaccurate depiction ever. Martin Sheen isn't the kidnapper. And his hands aren't bigger than his head. That's just weird. Lesser-known Sheen Ramon co-stars as Scooter's brother Sterling. When Scooter gets kidnapped, it brings the dysfunctional family together. Sterling admits to stealing cars and putting a license plate on them that says "Sterling". Martin Sheen then says "Don't ever be corrupt unless you're going into politics". Still relevant today I tell ya. 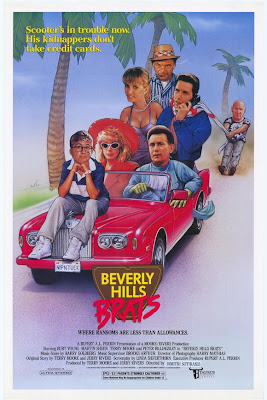 Scooter has a talking computer, and he uses it to help Clive's buddies Lefty and Elmo at the racetrack. Scooter also has a purse for a backpack. He carries around 100-dollar bills everywhere he goes, including to lunch at school. You have to remember, these are BEVERLY HILLS BRATS we're talking about here! Scooter gets called "a brat" 7 or 8 times throughout the course of the film. He also pulls a gun on Clive and states "I'm a member of the Beverly Hills Gun Club!" He looks like he's about ten years old.

Important note: In order NOT to be recognized, Scooter dresses up like Little Bo Peep, and stays that way for at least half the movie. He is dressed as 'Peep so long, including dressing that way at the aforementioned racetrack, it causes Clive to say "Are you a little funny, kid?" 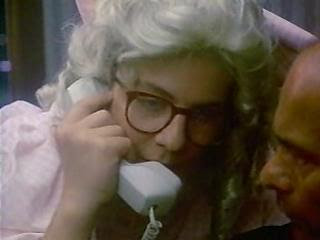 Young puts in his usual likable performance. He and Billingsley have good chemistry and you care about their plight. Without Young there would be no movie.

The VHS tape was released on the Media label. For a lesser-seen 80's experience, check out "Beverly Hills Brats".