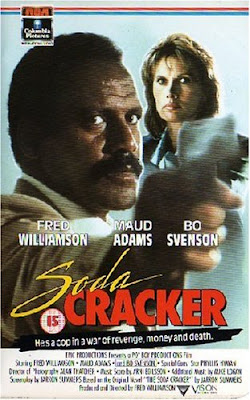 "When the system fails...you make your own justice."

Based on the novel "The Soda Cracker" by Jaron Summers, "The Kill Reflex" stars fan favorite Fred Willamson as title character Detective Soda Cracker, or "Soda" for short. When his partner Phil Gillespe is mysteriously killed by a sniper, Soda runs through all of Chicago trying to get answers, whether that means infiltrating the criminal underworld or discovering corruption in his own department.

Soda suspects his old nemesis Ivan Moss (Svenson) of being behind it all. Meanwhile, Soda develops a relationship with fellow detective Crystal Tarver (Adams) and also spends time with Phil's 14-year old son, Cameron. Will Soda fizzle in his investigation or will he be snappy and refreshing in his take on crime?

The original title of this movie is "Soda Cracker". The title "The Kill Reflex" is one of those superimposed video titles. However, before it comes on, the credit before it is "Fred Williamson is..." "Fred Williamson is the Kill Reflex"? That doesn't make any sense. They didn't bother to change it. The end credits say "Soda Cracker" and they didn't change that either. 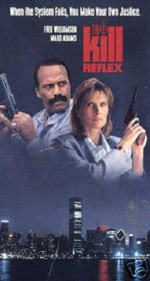 But that aside, Williamson brings his usual energy and likability to the project. Without Fred, it would've been dire. Like The Big Score (1983), there is an extended nightclub\singing sequence and if you are familiar with Williamson's other cop movies, this one fits right in.

It is humorous when Soda takes Cameron, who is this little white kid, to a shooting range and we don't know who the kid is at first. Soda refers to all criminals and baddies as "pukes". Ivan Moss is one of the worst pukes of the bunch. He is a drug dealer, and when he is not wearing a full Olympic track suit with sandals or numerous different Cosby Sweaters, he is wearing a kimono. Maybe Svenson got it when he filmed White Phantom (1987). 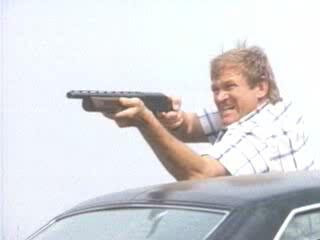 Moss, as an evildoer, has an Ace up his sleeve. His brother Ace (D.R. Jones). He is a big lummox and is the muscle for Moss's organization. He is supposedly bigger in size than Soda and besides this, Ivan Moss has the most deadly weapon of all time: two remote-control toy helicopters. He must have seen those late night commercials for "Air Hogs" because he sends them after Soda with a vengeance. Soda even has a Sergio Leone-style showdown with one of them.

In other movie references, Soda's partner Tarver shoots a VHS copy of Evil Dead II (1987) with a gun.

When Soda is finally closing in on Ivan, one of the baddies says: "Now you got Soda on your ass!" How did they say that with a straight face? Also during the climax, there is a funny "swatting" noise on the soundtrack. Watch out for it.

If you don't love Fred Williamson, you are a bad American and his personality carries The Kill Reflex.