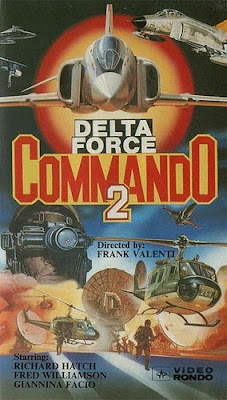 
You gotta love those Italian cash-ins. Just look at the title. They just took "Delta Force" and "Commando" and put them together, whether they belong that way or not. Then they added the nonsensical subtitle "Priority Red One". Usually a "One" doesn't come AFTER a "II". This, right there in the title, should give you a really clear idea what the rest of the movie is like.

In this confusing jumble, sometimes we are in a military base where "American" people walk around a lot. Their footsteps are louder than their voices. Apparently there are terrorists on the loose and only Samuel Back (Williamson) and General McCailland (Johnson) can stop them. They also believe a mole is in their base and they have to find him. Meanwhile, Brett Haskell (Richard Hatch, not the naked guy from "Survivor" who went to jail for tax evasion), the head of Delta Force, whatever that is, teams up with a mysterious woman (Giannina Facio) to fight the terrorists...or something like that. 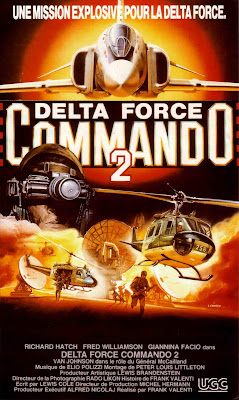 "DFCII: PRO" is actually kind of a fun film to watch, even though it is riddled with flaws and is too long, because it is so weird and off-kilter. In between stock footage of airplanes, and the elderly Van Johnson in a fighter jet, we get an overdubbed Fred Williamson talking about some sort of "poop sheet" and characters looking into the camera at every turn. Because this is an Italian production, the action scenes are sometimes actually gore scenes and there is some English-as-a-second-language dialogue such as: "Sometimes nothing makes sense anymore" and "Sgt. Coleman spilled the beans before he bit the dust". Also they are working on the top-secret "Operation Leonard" -- quite possibly one of the worst operation names...maybe ever. But it's funny.

A highlight for Van Johnson is during one of his look-in-the-camera moments. He screams at us: "I LEARNED ABOUT IT ON THE FLIGHT!!!!" and he seems like a disgruntled grandpa.

Fan-favorite Fred "The Hammer" Williamson looks bored and this is a total paycheck for the great dude. It is great to see him, but his voice is weird, and this is not prime Fred. Speaking of odd overdubbing, the character of Coleman speaks in halting, herky-jerky fashion and sounds a lot like William Shatner. Did we mention Hatch goes fishing with a crossbow? It's all pretty nuts...

Put this movie on your "poop sheet" tonight!