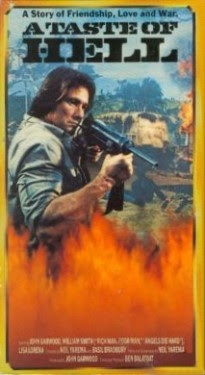 
A Taste of Hell is a very slow, boring, and dull turkey of a film. An on-screen title tells us we are in "Phillipines 1942" (otherwise we wouldn't know, except for the fact that Vic Diaz is the main baddie and he has been in every Filipino movie ever made). John Garwood plays Lt. Barry Mann, a horribly disfigured freak who goes around chopping up Japanese soldiers and lives in a cave. He wears a large straw hat and shambles around pathetically. When a young boy, Pedro, befriends him and lets him share his cave, this must spur him on in some way and he goes after Major Kuramoto (Diaz), the evil Japanese...Major.

Meanwhile, non-disfigured hero Jack Lowell (Smith) tries to save his former girlfriend, Maria, from the evil Japanese, who have imprisoned all the women they could find. Kuramoto put Maria in a tiger cage because he has special designs on her. Will Maria be saved? Will Lowell go behind enemy lines and save the day? Who is that freakish dude with the machete? Will you die of utter boredom? Who can tell?

I have made this movie sound much, much better than it is. It is a total slog, it commits the biggest sin of moviemaking: it is boring. Filmmakers have so many tools at their disposal to make sure their movie is NOT boring, there is truly no excuse. Sadly, "A Taste of Hell" is a jumble of nonsensical mush. In a bad way. There is too much unfocused talking and love-bits, not enough action or Major Kuramoto, the things that would have saved it. It is unclear who the characters are or what they want. Quickly, the audience does not care either.

Additionally, it is insulting to the audience, because the last 5-7 minutes of the film has the action and violence you have been craving. You CANNOT make the audience wade through 80 minutes of NOTHING and then expect them to be happy with a few bullet hits and a guy falling out of a guard tower. That's a big no-no. There is a fan-favorite death, a decapitation, which is welcome, but it's too little too late.

Interestingly, this was released by Harry Novak's Boxoffice International Pictures. This sort of war-based tripe was different for Harry, who normally traffics in Sexploitation. For more on Harry, please visit somethingweird.com.

While, in its (admittedly tired) mixture of war and some light horror elements, it is somewhat surprising it got a PG rating, you have to remember, some amazing things were rated PG back in the day. Just look at Blood and Lace (1971).

It all ends with the onscreen title "...and Satan smiled". It is as confusing as all that came before it. It really could have used that type of insanity earlier on. Sometimes confusing can be good - the obvious example is Night of the Kickfighters - but here it's not. Avoid A Taste of Hell.