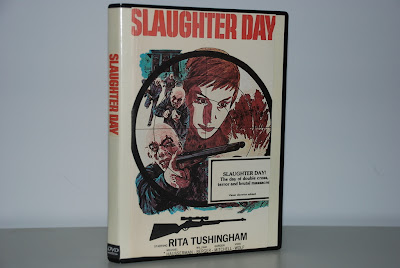 AKA: Situation and Deadline

Set in Germany, Slaughter Day tells the tale of Michael (Hausserman), a mysterious man with an elaborate plan for a big bank heist. He's pretty handy with radios, so he assembles his ragtag team of accomplices by placing little communication devices in packs of cigarettes, car radios and other places so his team never sees his face. While he is meticulously planning his "perfect crime", he finds the time to fall in love with Rita (Tushingham) and they spend plenty of time at his isolated cabin in the woods. Unbeknownst to Rita, Michael is planning on finally meeting up with his fellow baddies at the cabin. So she and her group of friends show up there for some fun, and unpleasantness ensues.

As for the other characters, it seems Michael's sole criteria for putting together his team is that they have funny facial hair. Veteran of this type of film Gordon Mitchell almost steals the show as one of the thieves. He has a great face and the film could have used more of him. He easily could have played the Michael character.

I would be remiss if I were to leave out one of Rita's friends she takes to the cabin: an obese man obsessed with fishing. ALL of his lines in the film mention how bad he wants to go fishing. Why is she friends with him? He would be much more at home as the token fat guy in an 80's sex romp.

There are some interesting locations, but the color on the U.S. VHS tape is drab and flat, doing a disservice to the cinematography. The silly dubbing and slow pace of the film also don't do it any favors, but that's a two-sided coin, as the 70's European flair is one of the better aspects of Slaughter Day.

Not a very uplifting experience, Slaughter Day might be of interest to heist-film fans (are there any?) who have seen every other heist film ever made. Or possibly fans of Rita Tushingham. Otherwise, I wouldn't put it at the top of your list of things to see.