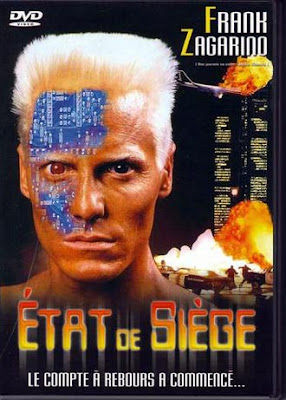 
When Romulus the android (Zagarino) comes to life after a lot of clacking on computers, he and his henchmen decide to take an entire hospital hostage. Naturally, the President's daughter (Foster) is in the hospital. Apparently this is happening because the evil Kinderman, head of ATR (Advanced Technical Research) and the maker of Romulus, wants the President to step aside so he can create a new world order. Obviously the only solution to this problem is to defrost Martin Kove and send him in to save the day. In the future, jail is being frozen in ice. Henceforth it's "Die Hard in a hospital" as Kove uses his skills as a football player and "redneck killer" to take down the baddies.

Zagarino is meant to look like Dolph Lundgren as Drago (see the hair) and his robotic acting suits him perfectly. Speaking of funny hair, Kove, when he is defrosted, has a silly mountain man beard that doesn't match his hair. So, to put an end to Romulus, Kove heads up "Operation Bird-Dog", the most intimidating operation name ever. They needlessly give each other "handles" so, of course, the cries are "Fox to Chicken Hawk, Fox to Chicken Hawk". Couldn't they have thought of something else? What's the audience supposed to think? 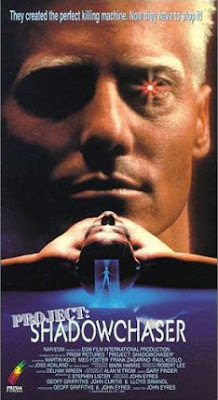 The debatably miscast Foster as the President's daughter portrays the character that is always whining and asking a lot of annoying questions. It's not her fault, we love Meg Foster. But in these types of movies, someone has to bear that load.

Romulus has some funny henchmen. One is a fat guy name Zanuchi. Another one resembles Dale "Apollo" Cook.

Joss Ackland tries to rise above the material as Kinderman. He has a great voice for what he was trying to do. When he is communicating with Romulus, he mentions that "Desilva" (the Martin Kove character) is "insignificant".

Apparently, Kinderman programmed Romulus with a Pee-Wee's Playhouse-style "secret word" in his brain, because he reacts with a crazy robot noise and strange neck movement. This idea is never paid off. Apparently Romulus is one insecure 'bot.

Thanks so much for the kind words.

I also enjoy your blog a lot!

Kove made this film for me, and it's too bad Meg Foster's character wasn't more consistent, because the two of them would've been good together. It's just good 90s DTV action sci-fi cheese. Good stuff.

Agreed. Kove was great and Meg Foster wasn't too bad.