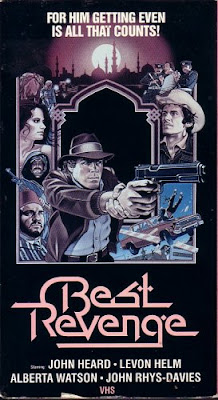 Charlie Granger (Heard) is a good-natured pot dealer who wants do nothing more than play his harmonica, play some b-ball with his buddy Brett Monroe (McHattie of One Man Out fame) and wear his cool Indiana Jones-style hat. When evil gangster Leo Ellis (Moses Znaimer) forces Charlie to go to Spain and Morocco to take part in a 4 million dollar drug deal, Charlie has no choice but to reluctantly accept the danger. Charlie teams up with Bo (Helm) and attempts to get the stash back to the U.S. Will he succeed?

John Heard puts in his usual solid performance. McHattie as the mustachioed photographer friend of Charlie's is totally different from his role in One Man Out. In Best Revenge, he looks less like Peter Weller than he does in 'Out.

One of the better aspects of 'Revenge is its attention to detail. It shows what a huge ordeal it would be to get drugs from overseas into the U.S. Normally those people aren't the good guys, but Heard is likable. Additionally, there is some noteworthy location shooting and the cinematography shows the Morocco and Spain exteriors in a picturesque manner.

The music is by Keith Emerson and in true 80s fashion, it has its own title song, sung by Amanda Hayley.

One of the main problems of  'Revenge is its title. It is not "Revenge-y" enough. There is actually very little revenge being taken. It sets the viewer up for something that doesn't come. Simply a different title would have solved this problem.

Fans of John Heard will appreciate Best Revenge. Maybe the reason why this movie is so under the radar is that fact that it is decent but not entirely satisfying.

I thought this film was really good, both serious and entertaining. But I agree with other reviewers that it's not 'revenge-y' enough. Grainger doesn't have any idea of a double-cross till towards the end of the film; and his 'revenge' is ultimately a last-minute decision which nevertheless serves everyone right at the end of the day.

I am sorry this film is not out on DVD as my WHS copy is getting old and this is one of my favourite movies to watch (all the more, now, because it's got Levon Helm in it, and Helm was just terrific in this role).

We agree with you and thanks for your comment!

Underated movie with a amazing soundtrack composed by Keith Emerson.

Definitely agree! Thanks for reading the site.