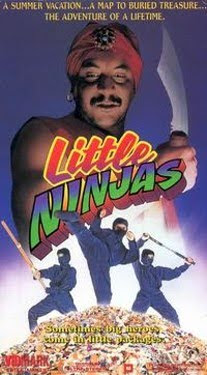 AKA: 3 Little Ninjas and the Lost Treasure

Our journey begins at Rotunga Island, where Stevie Campbell and his mom and his two friends Jon and Alan are riding on a water buffalo heading for the Temple of Penchat. On the way, they say "We're going to the temple of Penchat. Yaaaayyy!!!" and "This cart is rad!", presumably referring to the water buffalo. Stevie, Jon and Alan are about ten years old and when they get to Penchat, they see a bunch of guys stickfighting and they exclaim "They are doing martial arts!"

All is not well, however. The evil Sarak, who looks like a genie with a mustache and open shirt, wants a treasure map that is located in the town of Penchat. The kids stumble upon the map and have a badly-choreographed fight with Sarak and they throw eggs at him. After Sarak exclaims "No one escapes the wrath of Sarak", the kids escape back to Los Angeles. Sarak follows them. The kids go to "Camp Karate", a summer training camp. Sarak follows them there and a crazy conflict ensues.

Sarak has three henchmen, who are all dum-dums. One is named Zonk. Sarak calls him a "faithful elephant". He also calls Americans "foreign dogs".

A very weird moment occurs when Ken, a creepy Sensei, says "the boys are changing. I'm going to check on them". Chris Hansen will be coming to meet him soon.

The movie in a nutshell is 90 minutes of badguys yelling "Raaaaah!" and the kids running away and yelling "Aaaaaaaaah". Add to that some Benny Hill-style chases and absurd "BOING!" sound effects, and there you have it. The kids are non-actors and probably had a fun time making the film. Naturally, it ends on a funny freeze frame.

For childish fun that's off the beaten track, check out Little Ninjas.