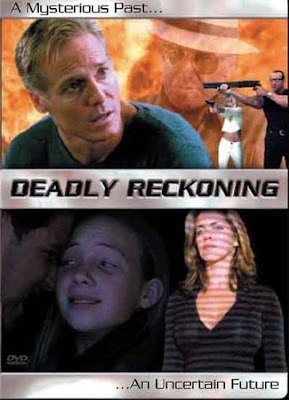 AKA: The Company Man

"Deadly Reckoning" is an oddity that sadly is too junky and downmarket to be all that interesting.

A block of wood, excuse me, Frank Zagarino, plays Ernest Gray, bespectacled owner of the Either/Or bookstore (apparently a real place in Hermosa Beach, CA). He just wants to be left alone to raise his young daughter, Jennifer, and get her into Julliard. Unfortunately, he is menaced for $50 in protection money by a trio of middle-aged "homies". Their big threat is to call him "Book Boy". I know, I know. As if that wasn't enough, it turns out Gray - if that's his REAL name - was the "greatest spy of them all" for the CIA with the code name of Napoleon.  One of his big achievements was to dismantle a terror cell named...The Cell.

Now the evil Control 5 (Vaughn - that's his actual name in the film) and his henchmen, one of which is the beefy, shotgun-wielding Van Guilder (Hues) are after Ernest and Jennifer. Luckily, Ernest's compadres Lewis (Genesse), The Mule (Stroud) and  Marianna (Giordano) are helping them out. Will Gray and his daughter Jennifer Gray beat The Cell? 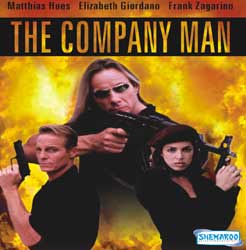 Frank Zagarino, who resembles a cross between Dolph Lundgren and Brian Bosworth, with the square-headedness of Howie Long, shows little-to-no emotion and his voice is weirdly monotonous. Matthias Hues joins the fray as Van Guilder, and he has some similar issues but he makes it work because he's charming. He is a hulking brute, and one of his "disguises" is to wear glasses and put his Fabio-like hair in a ponytail. But he still wears his trademark sleeveless shirt.

The actress that plays Gray's daughter, Rebecca Ayre Doughty, gives far and away the best performance of the film and acts rings around everyone else (it's not her fault her violin playing is an obvious keyboard). Her beloved bear, Chewy the Bear has some sort of secret to it which is never fleshed out.

Robert Vaughn- yes, THE Robert Vaughn, shows us the definition of "slumming". He's gone from being nominated for Oscars to Control 5. How the mighty have fallen. In the end credits, there is a credit for "Special Effects Hair Stylist". We can only assume this refers to Vaughn's hairpiece. We love Vaughn and we want the best for him. Why is he here?

Director Camacho, despite the nil budget, cheap feel  and dingy "film" quality, still tries for some John Woo-style flourishes but they are pretty ham-handed. Note the bookstore and abandoned warehouse (of course) shootouts. Actually a lot of the movie is padded out with brainless shooting.

It seems the only people that should see "Deadly Reckoning" are die-hard Zagarino, Hues or Vaughn fans. Anybody who watches this glop will get their intelligence insulted.

Wow, Matthias Hues and Frank Zaggarino in one film? I think my head would implode. Thanks for commenting at LVA while I was out of the country. I'm working on a group project I think you should contribute to. Keep up the good work.

Don't forget Robert Vaughn is on hand as well. ("Control 5".) Thanks for reading and commenting. Keep me posted on your group project.

Shoot me an e-mail so I can communicate outside of comment boxes.

Just saw this one, and am pretty much in agreement. Too blah, which was too bad which such a great cast.

Agreed. If it had a better script and budget, this would have been a decent actioner. What a waste of Hues and Vaughn.