John Decker (Don) is a troubled lawyer with a tragedy in his past. He's trying to sort out his troubles with his friend and psychologist Dr. McConnell (Ron Steelman), or Mack as Decker calls him. Mack takes him to an art opening where he meets the beauty Joanna Montaigne (Shattuck) and wise old man Hiroshi (Aleong), who both influence his life in different ways - but at night, figuring he has nothing left to lose, Decker puts on his purple and black Nike running jacket and becomes...Karate Man! He goes around the city beating up and shooting bad guys and drug dealers. The media, based on the drunken ramblings of a homeless woman, runs with the "Karate Man" moniker and soon the whole city wants to know who he is, including Decker's friend on the police force, Lt. Croft (Delano). With both the cops and the baddies on his trail, will Decker/Karate Man win the day?

We love Don "The Dragon" Wilson and anything he's in, we'll watch. Here, he's as delightfully wooden as ever. It's great when Don wears glasses, and here he has some funny ones during his lawyer persona. This is a funny plot point - he's not a cop, he's not in Intelligence, CIA, FBI, etc...he's a LAWYER! Action Lawyer away! He even says at one point "I feel naked without my beeper!" Interestingly, Don gets the credit "Based on a Concept By Don The Dragon Wilson" - so he was involved in the creation as well. Director Munchkin strikes again and his movies are usually better than average. Here he goes for something a little less linear, with some weird scenes and flashbacks. 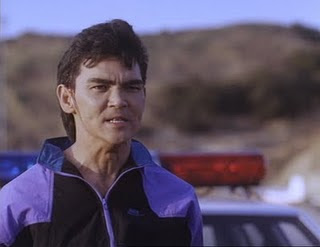 Speaking of which, the main influences here seem to be Batman (1989) and Robocop (1987), but without all the fantastical elements - it's just a man in a jogging suit. Oddly enough, Out For Blood prefigures Kick-Ass (2010), in the sense that it is about a self-made 'superhero', with no actual super powers, that becomes more and more popular as he is swept along by a wave of media interest.

Robert Miano stops by as Geisler, the evil mastermind. He has plenty of goons, not the least of which is a "Cowboy of the modern day" who doesn't seem to have a name. But he does have two of the biggest, stupidest meatheads ever. These two dunderheads are so ridiculously dumb they make the Barbarian Brothers look downright sophisticated. I guess they give the film some humor, which is always welcome.

For some rock-solid Don, with a cool vigilante/revenge theme, look no further than Out for Blood!

Also check out our buddy Direct To Video Connoisseur's review!

Ah good to see this is a positive review, I picked this up in a two-pack recently of Out for Blood and Final Impact for $2. Don is something special indeed!

Woah! $2.00? what a deal! Out For Blood is silly fun! Same with Final Impact! Lorenzo Lamas!

Great review, I was totally in agreement. Also, I think the blonder of the two meatheads was Malibu from American Gladiators. He was in a Piper film called Immortal Combat too, if it's the same guy.

Thanks DTVC! That's cool that was Malibu from American Gladiators! Saw Immortal Combat a long time ago, don't remember that meathead.