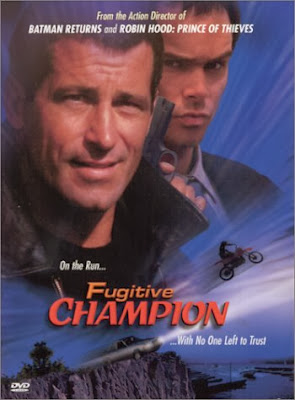 Jake McKnight (Mayer) is the ultimate meathead who is also a motocross champion. He is framed for being involved with a stolen motorcycle ring and for this grievous crime against humanity he is sentenced to hard labor on a chain gang for at least fifteen years. In the middle of his fifteenth year of breaking rocks in the sun, some mysterious men break him out of prison. Apparently McKnight inadvertently helped some gangsters and they owed him a favor. Now free, he goes on a search for his kidnapped daughter Annie (Bassler). Teaming up with the token computer nerd (Venocur) and token woman Trish Van Devere (Blaine) (not to be confused by the real person, actress Trish Van Devere, apparently), Jake has to avoid the stupid policemen on his trail and get involved with the seedy world of "Visual Dreams" to find his daughter. The main baddie is sniveling jerk Brad Chandler (Burr) who kidnaps women. Will Jake be able to rub his two brain cells together with enough force to save the day?

We've seen some dumb, moronic meatheads in our time, but Jake McKnight takes the cake. Mayer is so unbelievably wooden in this role, he makes Dale "Apollo" Cook look like John Leguizamo. Fugitive Champion has all the stiff, bad acting we've come to expect but...wow. Interestingly, not once, but TWICE in this film, McKnight cries. You read that correctly. He bawls like a baby. Rather than "feel his pain", it looks freakish, as if to say: "Tonight on FOX, when meatheads cry!"

Brad Chandler is not an intimidating villain. He looks like he's about ten years old. He whines and screams in a very effeminate manner. Actually, Burr does the best acting job of the movie, because we really hate Chandler. Venocur as Jimmy spouts a lot of computer gobbledygook. That's one of the problems with 'Champion. The dialogue and situations feel amateurish and like they were written by children. I think a Baio was involved. The characters don't relate to each other in a normal, adult manner. It's so babyish. Perhaps the script was a middle school project.

There is no action to speak of in this film. There is an impressive motocross chase that looks like a Mountain Dew commercial. That's about it. The motorcycle stunts in Cool As Ice (1991) were more cutting edge. The easily distracted cops don't really help. McKnight's "daughter" looks older than he does. The computers are funny to see and you gotta love 90's dial-up modems. Visual Dreams is actually a prehistoric version of Streaming. This movie was pretty ahead of its time.

In this sub-skinemax production that is riddled with dumbness and cliches, there is also the dreaded "fast motion". Weirdly, 20 minutes in, there is a man in the background of a scene with a blurred face. A BLURRED FACE! Is this a person who became famous and then sued? They couldn't take the scene out because it was integral to the plot.

This tape was released on the Aurora label. If anyone ever saw this in a video store, please write in and leave a comment. I'd love to know how much distribution this film had. How many stores ACTUALLY had this? And did anyone pick up the box and go "whoa, CHIP MAYER is in this? Let's rent it right now!" Aurora's tactic seems to be make him resemble a lost Baldwin brother on the box cover. Mayer doesn't really look like that. But would that really help?

A new winner has emerged in the doofus sweepstakes. This Chip only leaves crumbs of action.

Thanks for your comment Susan! This movie was a complete joke.