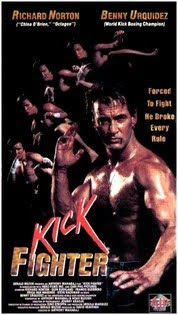 In "Bangkok today", a young, scrappy street kid named Ryan Travers (Norton) accidentally kills a gambler and goes to jail. Five years later, he gets out of Thailand's Tan Pun prison and is a new man (literally - there are rumors that Kick Fighter was stitched together from different sources, which would explain why at the beginning, Norton, supposedly playing a nine year old, DOES look younger and has longer hair, and when he emerges from prison, looks like the Norton we all know and love).

When gangsters blow up his parents' antique store, and his sister (Erica Van Wagener) falls ill with a heart condition, Travers needs money. Unfortunately his skills as a dockworker are no longer needed anywhere around town. So he puts his fighting skills to use in outdoor shipyard brawls. He soon rises through the ranks of boxcar joes thanks to his friend August, a character similar to Punchy from Fist Fighter (1989). Travers is scheduled to fight Jet (Urquidez of Bloodmatch (1991) fame, portraying himself?) in an actual ring. The match is dubbed the "Killer in Manila". Hm. But gangsters kidnapped his sister and want him to throw the fight. Will Travers emerge victorious?

It seems AIP invented "kickfighting". As we all know, they released the classic Night of the Kickfighters (1988), and turned this movie, originally just called "The Fighter" into "Kick Fighter". It seems to have been some sort of branding, but I don't think it took off. No one says "Oh, I saw that great kickfighting movie last night". This particular kickfighter is pretty entertaining, but it just seems like regular fighting, where the fighters use their arms and legs. It's not like Soccer-fighting where you're not allowed to punch. 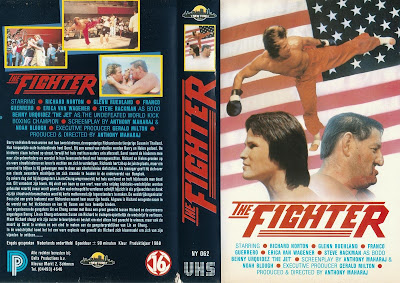 There are some interesting characters and situations, such as the cage match with the hulking brute Bodo (Rackman), who is similar to the beast from the aforementioned Fist Fighter. This toothless dum-dum's big move is to stand on Travers' chest. Travers also fights in a private match in a closed nightclub to only a few men. Who is the man in the ski mask he must fight? Could it be his friend Chai Wat (Guerrero)?

It's bad enough Travers must endure the locals constantly calling him a "yankee" (are Australians yankees?) but he doesn't really train, he just sits around in a surly mood drinking beer. That is, until the training sequence with the kickfighting master, also a beggar on the streets of Bangkok.

So here we have another team up of Norton with director Maharaj. They must have been buddies, because the later team up of the two, Crossfire (1988), is very similar (it even seems to have some of the same scenes), but Crossfire is more professionally done. Kick Fighter is like a cross between Fist of Glory (1991) (a "yankee" in Bangkok forced to fight; dingy film quality), and Massacre (1985) (basically ditto), and what's interesting about that is that David Heavener is listed as a producer of Kick Fighter in some sources. That might explain the similarity, especially in some chunks of the film that may have been stitched in.

Interesting note about the credits: This one referee must have been pretty famous, because he gets a lot of fanfare: Carlos "Sonny" Padilla, Jr.

And this is a real credit from the end of the film:

"In real life, Benny "The Jet" Urquidez is a true undefeated world champion kickboxer with a ring record of 57-0 with 49 knockouts. The final bout in this film is dedicated to all of his opponents who wished they could have a similar result in their bout with The Jet."

I'm sure his opponents appreciate that.

If you are a fan of Richard Norton or AIP product, you will like this exercise in silliness. If not, you may be really confused.

Comeuppance Review by: Brett and Ty
Posted by Ty at 8.9.10