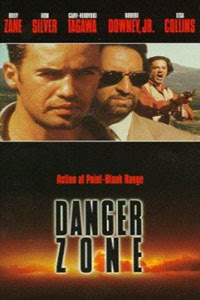 "Captain" Rick Morgan (Zane) works as a mine operator in East Zambezi, Africa (where they shot Damned River (1989) (?) where he sings with his African buddies and minds his own business. When his old pal Jim Scott (Downey Jr.) shows up at the mine with a truckful of toxic waste barrels, havoc ensues. Due to a mix-up, everyone blames Morgan for deaths due to the toxic sludge. A year later, Maurice Dupont (Silver) approaches Morgan, who is now a disheveled drunk. He recruits Morgan and Dr. Kim Woods (Collins) to investigate the truth of the matter. Even though Morgan enlists the help of his friends Nando (Russel Savadier) and Madumo (Patrick Shai) things get complicated because the ruthless and evil Chang (Tagawa) shows up everywhere they are and shoots up the place. Will Morgan clear his name? Will he survive the country where the rebels are fighting the government? What really happened to Scott? How did Robert Downey Jr. spend his $500,000 for his two weeks on the set?

Danger Zone is more of an ADVENTURE film than an action film. You wonder how Morgan will get out of all these cliffhanger-like scrapes. Just imagine a direct-to-video cross between Raiders Of The Lost Ark (1981) and Broken Arrow (1996). 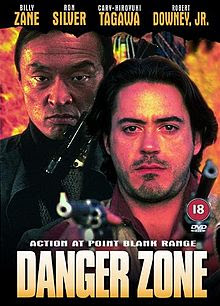 Nu Image produced the film, and Live entertainment released it, and it has some names, so they hoped it would be classier than the normal DTV project, which it is.

It has some blow-ups, rocket launchers and fight scenes, as well as some silly humor. It's all very palatable.

Billy Zane is funny as the man with the "alcoholic hat". It's a tan cap he wears to let the world know he is a raving drunk. There is even a scene where he retrieves the hat a la the aforementioned Indiana Jones. It's weird seeing a top name like Robert Downey Jr. in this type of product. He admits he did it for the money, but he probably had fun, if he remembers doing it. It was definitely a career low for him. His performance is more Jay Roberts Jr. than Robert Downey Jr. He has a ridiculous southern accent and every line he says ends with a drawling "Maaaan!" The nadir is reached with the line "This sucks, man!" We love Downey Jr. so it was unusual to see him like this.

Ron Silver puts in a quiet performance which could be construed as having no energy. Shot on location in South Africa, Danger Zone is a cut above the normal DTV actioner in terms of quality, and might be a good intro to people who are not familiar with the crazy world of direct-to-video films.

Damnit man, you must be looking at my DVD rack of 'to review' when you are doing your reviews! This was one of the nex ones on my list haha. Good review!

I look forward to your review also!